Do you remember your first “real” vacation as an adult? Depending on your age, you may or may not. But one thing for sure is that 25-year-old Austin Lewis won’t be quick to forget his first vacation as a working member of society. His trip this past December took him to Breckenridge to go skiing, and it ultimately became a life-changing experience when the investment banker found the Breckenridge Outdoor Education Center (BOEC). 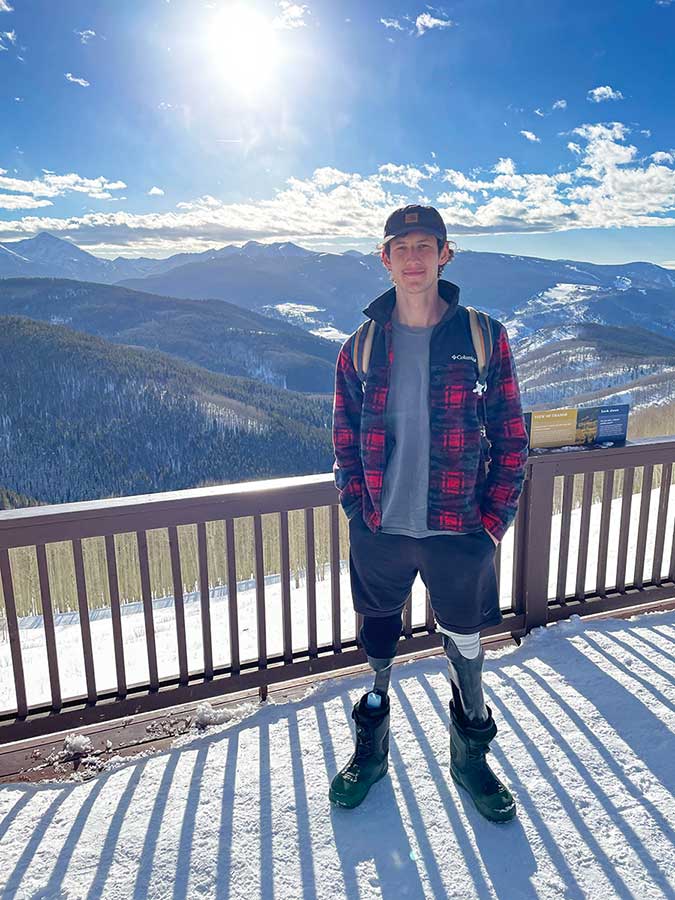 Austin Lewis poses at the Sawatch Range in Colorado

Austin was born and raised in the small town of Leonard, Texas, about 65 miles from Dallas, with a bustling population of 1,900 and a booming elevation of 719 feet above sea level. Amidst the cotton, corn and wheat fields, little Austin was adopted and immediately gained a loving and caring family. And as if joining an already established family wasn’t hard enough, Austin had to face a different kind of challenge right from the get-go as he was born with fibular hemimelia, a condition with the congenital absence of the fibula in both of his legs. This ultimately led to problems with his ankles not working correctly, and at two years old, his left leg was surgically amputated at the ankle. Then after several revisions over the years, at 13 years old, he made the difficult decision to amputate his right foot. From that point on, Austin literally had growing pains which resulted in bone spurs and multiple surgeries a year. So, as you’ve probably guessed by now, he was not walking much from eighth grade to senior year of high school without the aid of crutches. But that’s when things dramatically changed, 16 years after his first amputation, when he got his first pair of running legs and decided to take control of his own life. And Austin never second guessed himself along the way. 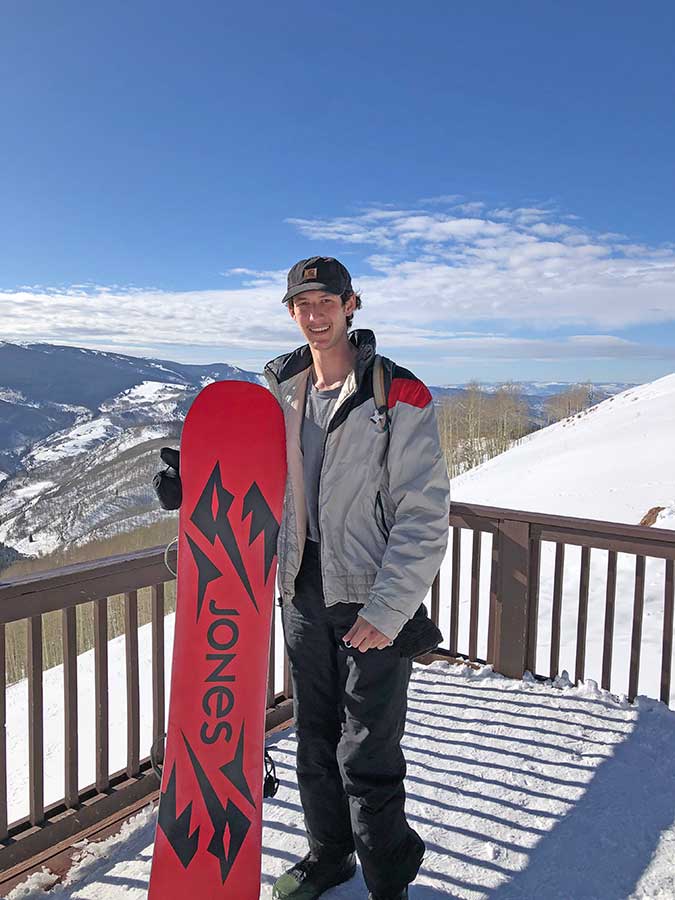 Austin poses with his snowboard

“Most people aren’t built like me mentally,” he says. “It was never a problem for me because I knew that I could do anything I wanted if I just gave it enough time and effort. Sometimes it just takes a little bit longer for me, but I was never really too upset about anything I have gone through.”

So with his new running legs, Lewis started training over the next couple of years and began to compete in track meets for the first time ever during his last year of college at Texas Tech University. But, as the coronavirus pandemic wreaked havoc on life, it caused a halt to his competitions just as he was getting started. Austin didn’t let that stop his athletic endeavors, however, even when dealing with the aftermath of two dislocated knees. And that’s where the BOEC became a part of his life.

After two weeks of adaptive skiing adventures with the National Sports Center for the Disabled and a few years on adaptive skis, the aforementioned dislocation of his knees forced him to make the switch from skiing to snowboarding at the BOEC. With no ankles to bend, and stretchy suspension sleeves binding his legs and prosthetics together, turns were difficult to achieve on skis. His ski friends would jokingly refer to him as “point and shoot” because he would just go straight down the hill. But “point and shoot” quickly changed to “adapt and overcome” when he met up with another Austin, BOEC instructor Austin Brockley, as he learned different ways to position his body and legs on a snowboard to get down the hill competently.

“The first day I crashed all morning,” remembers Lewis. “But when Austin [Brockley] came to be my instructor he took me to the right places and I hardly fell at all. We were doing blue runs by the end of the day and it was a blast.” 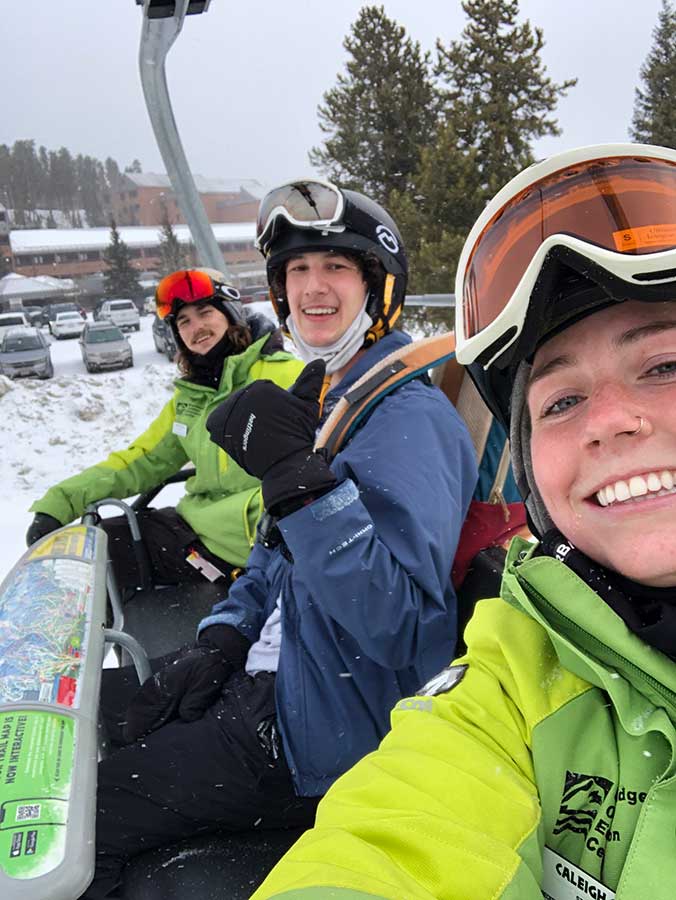 Austin Lewis with BOEC instructor Austin Brockley in the background. *Masks were removed just for this picture

And when it comes to his instructor, the “other Austin,” Lewis is quick to heap praise on him. “First of all his name is awesome, so I knew it would be a good fit,” he chuckles. “He was really helpful, super cool to talk to you and was a great instructor that not only knew the mountain, but knew the places to take me where I would feel comfortable but could still push myself.”

Speaking of pushing yourself. Tackling a blue run on only your second day snowboarding would be difficult for anyone, let alone someone with Bilateral BTK (Below The Knee). But for Austin it was an experience he won’t soon forget.

“It seemed really steep when I was looking down,” he says looking back at his first blue run. “I had to tell myself ‘you can do it, you’re a badass, don’t even worry, just focus in.’ We had to do it in sections because my calves were burning so bad, but I did get to the bottom and it was extremely satisfying. Everything just felt very surreal to me.”

And what does the other Austin have to say about this Austin? “He’s an awesome guy and we had a great conversation about his attitude towards his disability and how when he changed his mindset about it, he became a much more confident guy,” said BOEC instructor Austin Brockley. “It’s that same attitude that encouraged him to try something like snowboarding which he had once seen as impossible. His outlook on life is exactly what and why we do what we do at the BOEC, and it’s what we strive to instill in all our participants.”

So, with his first BOEC snowboarding experience in hand, Austin Lewis may have gained just the right amount of confidence to tackle pretty much anything. Not only has he purchased, modified and ridden 7,000 miles on a motorcycle – something people told him he could never do – he has his sights set on competing in the 200m and 400m events in Track and Field at the 2024 Paralympics, emulating his hero, silver medalist Hunter Woodhall. And all of this after facing adversity day in and day out since the day he was born. 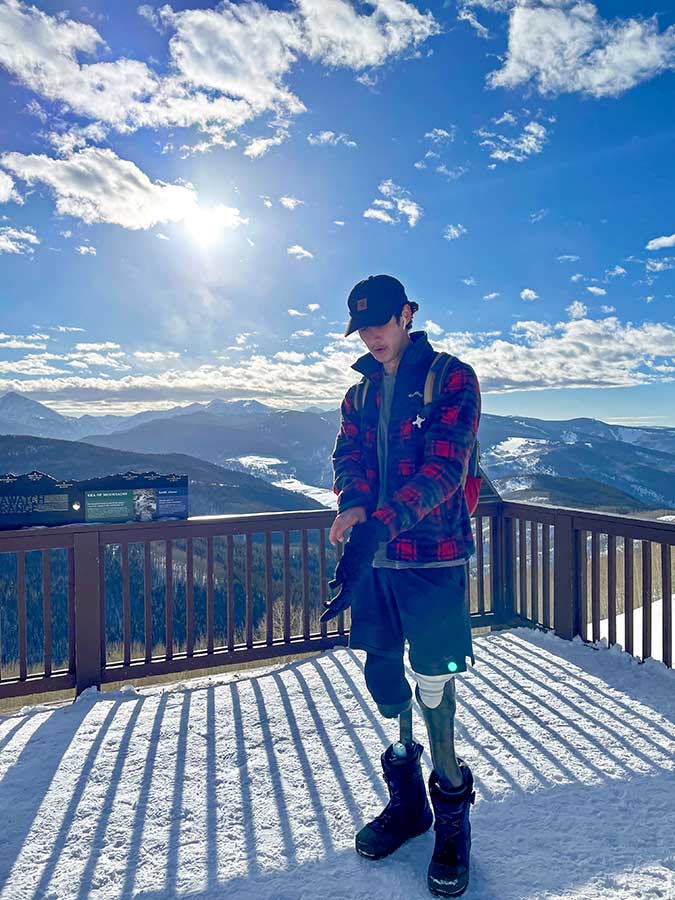 Austin has his game face on

“Being born so different can have a toll on you as far as feeling self-conscious about who you are and not accepting it,” he says. “But when you go into an environment and you’re feeling that way about yourself, you’re not going to do anything productive. So I got to a point in my life where I realized this is who I am, I can’t change any of it, so I’m just going to be myself and be okay with who I am. Once I started being like that, people respected that and could see it when I walked into a room. When I realized ‘I’m just me and if someone doesn’t like that I don’t need them in my life,’ my life changed for the better.

So, obviously, Austin Lewis is a wonderful example of rising above the challenges that are put in front of him, something he urges others with disabilities to do, especially when it comes to adaptive skiing and snowboarding.

“It’s all in your head if you ever say you can’t do anything,” proclaims Austin. “If there’s a will there’s a way. There’s like 30 different ways you can do this [adaptive skiing & snowboarding] and there’s going to be one that works best for you that you like. If you’re nervous that you’re too disabled to do something, there’s always a way to do it.”

This is some great advice from a truly inspirational figure, Austin Lewis. And when it comes to adaptive snowsports, he credits his experiences on the hill for some of his “adapt and overcome” attitude.

“It was insanely awesome and every person I met there [at BOEC] was the coolest person ever and had a great personality,” he says. “I’m extremely blessed that this program exists because without it I probably wouldn’t have tried a lot of things that I’ve tried, and there would be so many disabled people that would never try adaptive skiing.”

We’re glad we can be there for you, Austin. Keep on overcoming the challenges in front of you and we’ll see you again next year for some more blue runs!