Nobody Knows You Like I Do: BOEC Volunteer Shari Topping Shares Her Story of Triumph and Overcoming Disability

In 1999 the world was in the midst of the “Y2K” hype that had everyone afraid that the end of the world was near. We were less than three months away from the Columbine school shooting tragedy that would ultimately take the lives of 15 and change the landscape of school safety in America forever. All-time hockey great Wayne Gretzky retired, the New York Yankees won their 25th World Series, and Pokémon fever gripped the U.S. Yes, it was a historical year in many senses, but for Breckenridge Outdoor Education Center (BOEC) Volunteer Shari Topping, 1999 was the year that changed her life forever. 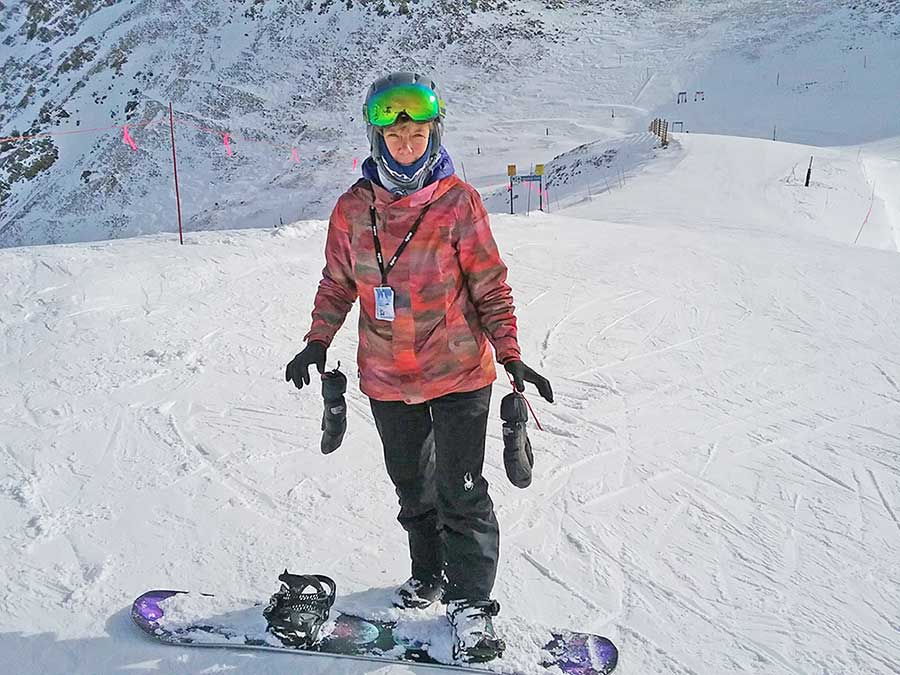 Shari Topping Poses on her Snowboard

It didn’t take a whole year to change her life, however, it came down to just a split second of time on a quintessential 29-degree Saturday in January that did it. The then 37-year-old Topping was literally on top of the world on that bluebird day as she was doing what she loved to do … Telemark skiing at Arapahoe Basin Ski Area (A-Basin). She had just finished her Master’s Degree in Project Management and was a “rising star” in many eyes as an Environmental Consultant. And all of that came to a screeching halt in the blink of an eye when the horrific happened.

“A ski patroller yelled at me, ‘You are going down now,’ as I snapped out of an unconscious state. I realized that I was in a sled and going down to the first aid room because I must be injured.” Topping vividly recalled. “I will always remember that day,” she continued. “I had a neck collar on, was secured tightly to a backboard and injured. Ski Patrol told me that a 19-year-old male had collided with me, rendering me motionless as the young man stood at the scene crying over my stationary body.”

Shari had fallen victim to one of the all too common ski collisions that happen every year at ski resorts around the world. Unfortunately, though, this particular ski accident was a game-changer for the Illinois-native. It took a multitude of doctor’s visits – sometimes seven days a week – to find out what her resulting injuries were. She was in so much pain that she even asked to be admitted to the hospital to make the suffering go away. It wasn’t until one particular appointment a month later that Topping found her answer.

“I can distinctly remember the doctor saying to me, ‘You have Fibromyalgia, quit work and file for disability.’ I kept repeating to myself what the doctor said and was in disbelief,” said Topping. “I didn’t know what Fibromyalgia was at the time and it took me six months before I could even say it properly. But it hurt from the top of my head to the bottom of my feet all day and every day.” 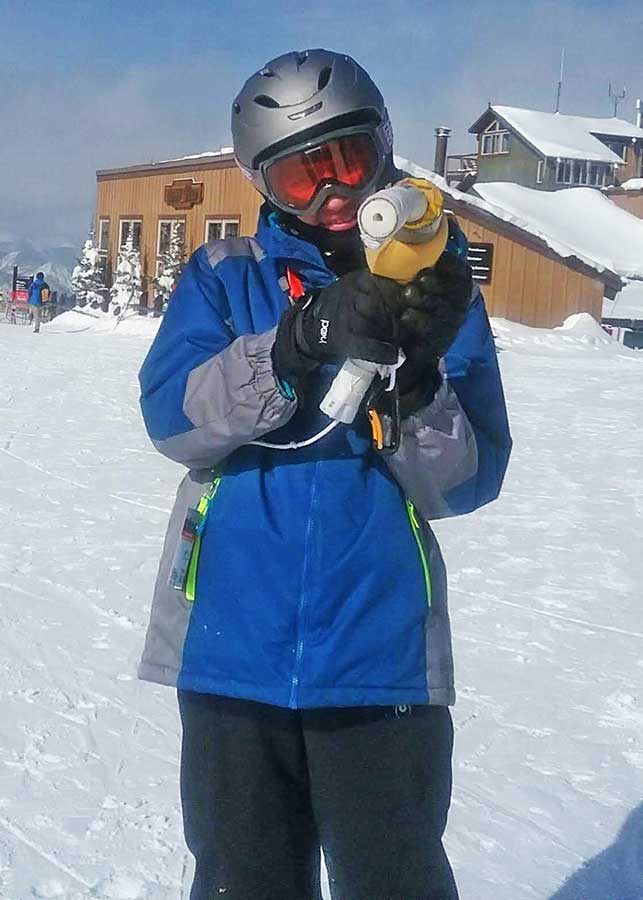 Shari teaches a student with a Ghostbuster gun, her student’s favorite movie

Shari Topping was one of the lucky ones in an ironic sense. The disease wasn’t officially diagnosed until 1990, leaving many people before that time struggling to find out what was going on with their bodies. Sufferers would spend years going from doctor to doctor without any available treatment. Topping, though, was diagnosed in a relatively short amount of time, alleviating years of untreated pain and anxiety. With her diagnosis in hand, she decided on her own that she would exercise and ski to help relieve some of the symptoms. And it did.

Topping was now at a crossroads point in her life. Prior to her accident, she had been an avid skier, general outdoor enthusiast and in what turns out to be an ironic twist, a volunteer adaptive ski instructor with the National Sports Center for the Disabled (NCSD) in Winter Park, CO. Now, four different doctors were telling her that she would never ski again. Shari disagreed and ultimately chose her own path.

“It made me angry when the neurologist would begin a statement with ‘When you were a skier…’ So, I chose not to believe the doctors, as skiing was a big part of my life. My passion for the sport ultimately drove me to ski again,” said Topping. “I chose to use what I learned from the NSCD to teach people with disabilities and apply that to myself. It was a challenge to get back to skiing, snowboarding and telemarking, but I was driven to succeed despite my disability.”

Over her years of rehabilitation, Shari not only got back on the hill but ultimately earned her Professional Ski Instructor of America (PSIA) credentials, including PSIA Level II Alpine, PSIA Level II Telemark, PSIA Level II Adaptive and AASI Level I Snowboard. Then one day, in a wonderful twist of fate, she was back skiing at A-Basin when a ski instructor approached her about joining the team as a staff instructor. Naturally she took the job, which led her to a chance encounter in 2005 with longtime BOEC volunteer, Lance Glaser. He immediately recruited Shari to become part of the non-profit’s Adaptive Ski & Snowboard Volunteer Program, something that helped to renew a sense of excitement in Topping’s world.

“It was so exciting to begin this new adventure,” said Shari as she recounted her first lesson with BOEC 15 years ago. “I always look forward to meeting my students every day and the challenge of making a unique lesson to meet or exceed the goals of the student. I give my lessons everything that I have physically, mentally and emotionally and get so amped up after every lesson because I have so much fun teaching the disabled even though I am also disabled. I am always excited that I get to share the story of my day with others.” 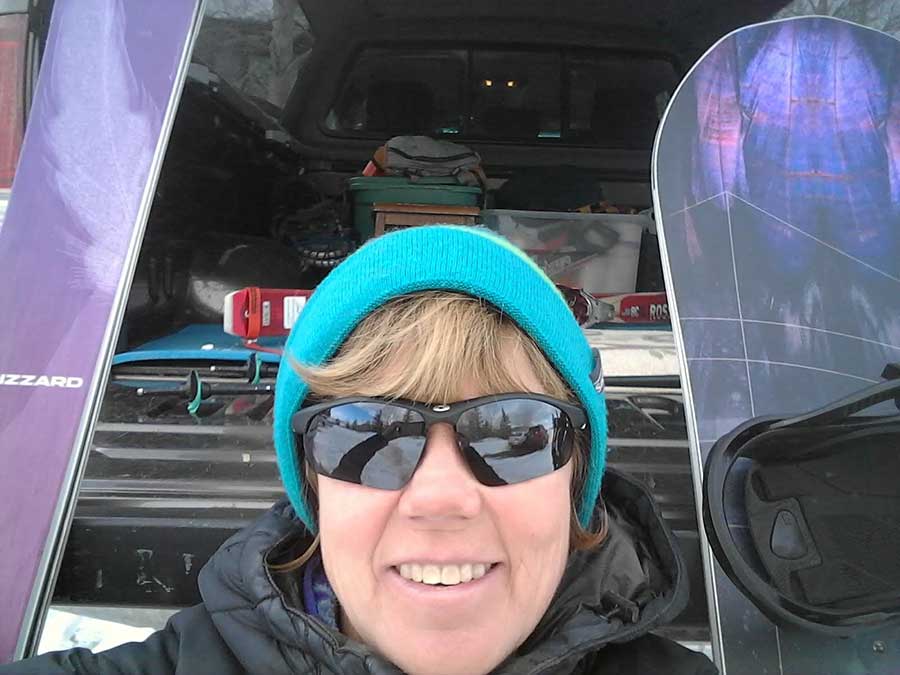 Shari poses with her snowboard and skins

The disabled teaching the disabled is the theme of a story that is riddled with ironic twists and turns over her 25-years of teaching those with disabilities to ski and ride. However, there was one more hairpin turn to come. Almost 19 years to the day, on New Year’s Day 2018, Shari Topping was dealt another crushing blow with a diagnosis of Multiple Sclerosis (MS). That morning she woke to a crushing sensation in her chest, sending her to the emergency room once again, only to find out that she was experiencing what doctors refer to as an “MS Hug,” making it difficult to breathe and even speak. This led to more neurological testing and ultimately the dreaded diagnosis.

“I was devastated because of my MS diagnosis and what the future might hold for me,” Topping recounted. “My brother had also been diagnosed 10 years earlier with an aggressive form of MS and was using a walker as well as a wheelchair when needed. I dreaded the thought of not being able to continue to ski because of this.”

But, once again, Shari Topping did not let a grim diagnosis stop her from doing what she loves. While she had to learn to ski, snowboard and Telemark all over again, this time it was seemingly just a bump in the road for this seasoned vet.

“It was extremely hard to do with the limitations that accompany Fibromyalgia and MS,” recounts Topping. “It hurts to simply get out of bed every morning and to motivate myself to exercise when I’m feeling so much pain. But I feel better when I begin exercising and am grateful that I ‘sucked it up’ and skied. I’m not skiing on double black terrain anymore, but I’m grateful to just be able to tackle the blue terrain. It makes me feel good to still be able to teach people with disabilities … they inspire me to keep going.”

And keep going she has! This is a wonderful example of diversity meeting diversity head-on and the resulting triumph of a determined individual. Shari has not only prevailed over her diversities, but she uses them as a tool to inspire other individuals to get the better of theirs. While nobody would ever fathom going from being an able-bodied person with a bright career in environmental consultation and teaching people with disabilities to then becoming disabled themselves, Topping has taken what has been given to her and made the best of it by giving back to others.

“One of the lessons that I’ve learned by being disabled is to never ever give up and keep the hope,” said Topping. “No matter what your medical condition is, I urge you to have fun and keep exercising. Most importantly, being in the outdoors is very therapeutic, so get out there and keep going.”

And keep going she has!

If you are interested in becoming a BOEC volunteer, please visit our Volunteer page and fill out a Volunteer Interest Form.