His last name may be Shy, but there’s certainly nothing bashful about 6-year old Coleman Shy. In fact, his dad Matt says that Coleman smiles and laughs more than anyone he’s ever met, and it’s because of this 43-year-old single father of two, and his amazing support group, that Coleman is zipping down the hill on a bi-ski at the Keystone Adaptive Center (KAC), part of the Breckenridge Outdoor Education Center (BOEC) Adaptive Ski & Snowboard Program. Coleman is one of only about 120 individuals in the world to have a genetic disorder so rare that there’s not even a name for it. 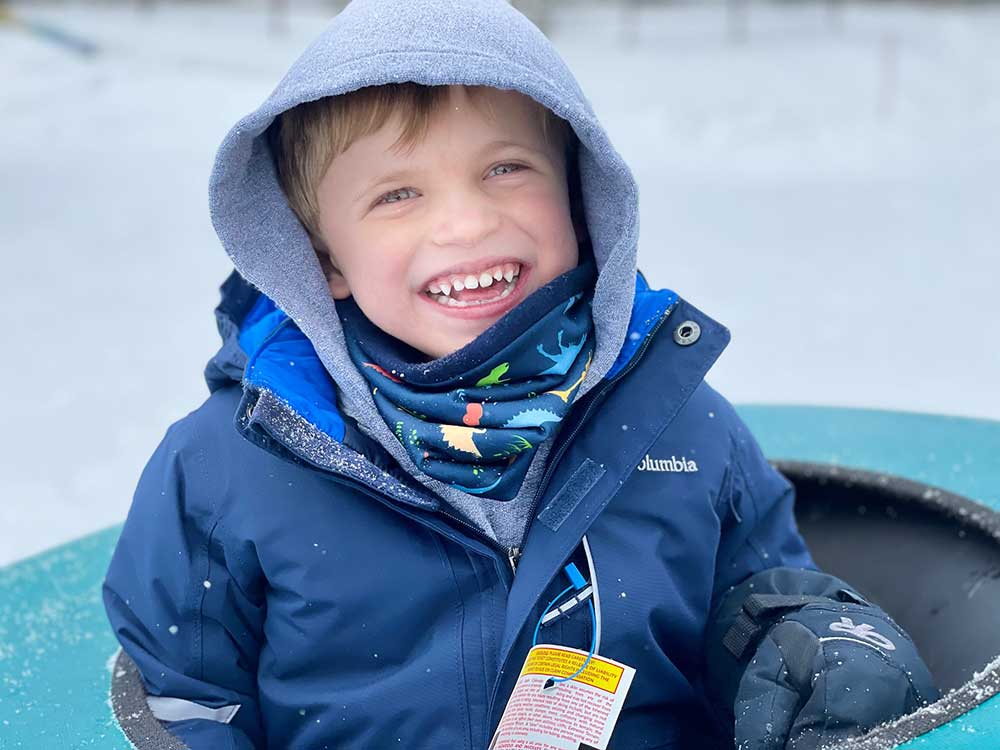 Coleman is all smiles after his ski lesson

SETBP1 disorder, as it is referred to, is a mutation in one of the two copies of the SETBP1 gene that does not produce a sufficient amount of the protein for the body to function normally. While the symptoms vary for those impacted by this disorder, expressive speech impairment and developmental delays seem to be the major challenges one faces.

Coleman was not only born with this disorder, but was also born four weeks premature on December 23, 2015, just in time for the holidays. While that specific holiday season was extra special for the family of four, about 9 months later they started to notice something was “off” as Cole wasn’t hitting his developmental milestones. Frequent trips to the geneticist over the next year-plus revealed nothing until he was about two years old when they finally received an answer – SETBP1 disorder.

“It was pretty challenging not to know, we’re so used to things having an answer in life,” says Matt, a native of Bentonville, Arkansas. “That was just something we were turning up blanks on. And now it’s just a matter of trying to work through what are the best ways to help navigate life, not just for him but what can other people learn from his condition.”

So navigating life and its challenges for Coleman has now become the norm. One of the first things you’ll notice about him is that he’s non-verbal and doesn’t use words to express his emotions. This rare condition also limits his cognitive abilities to the point where he doesn’t process instructions like other kids his age do. Coleman also needs help eating and going to the bathroom, two things Matt believes can be worked on moving forward. 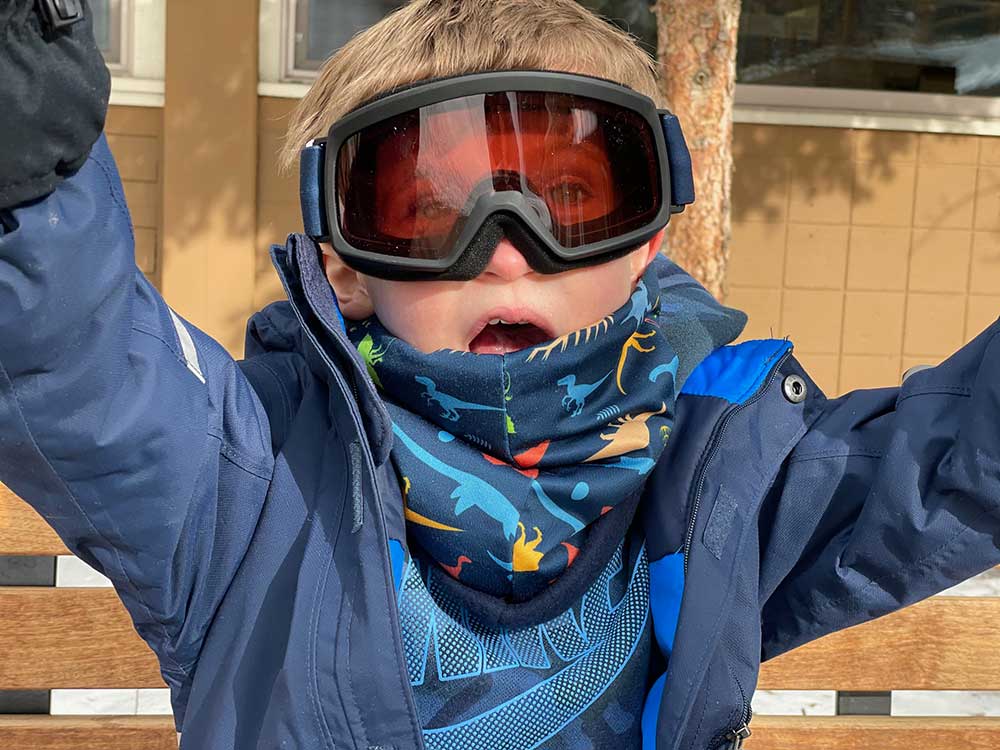 Coleman tests out his goggles before his lesson

“The goal that we have is just to see progress, no matter how slow it is. Just to see glimpses of improvement, and it just takes a lot of persistence and consistency in what we do and how we do it.” says Matt. “Eventually you get to those breakthrough milestones and it’s a pretty big day when he does things like direct you to the refrigerator when he wants something to drink or eat. You kind of get a sense of what he’s looking for. That’s the goal, just constant improvement. His goals are to go to the bathroom, to feed himself and to basically stop or go on command … stop what you’re doing or go do more of what you’re doing.”

As if things weren’t hard enough for the Shy household already, Coleman and his 8-year-old brother Brooks lost their mother a few years ago in what Matt can only say “has been a wild ride the last few years for sure.” But, Cole, Brooks, Matt, his now girlfriend Jennifer and her three kids keep pushing forward with whatever else life has to throw at them. In fact, they don’t sit back and wait, but instead face it all head on! 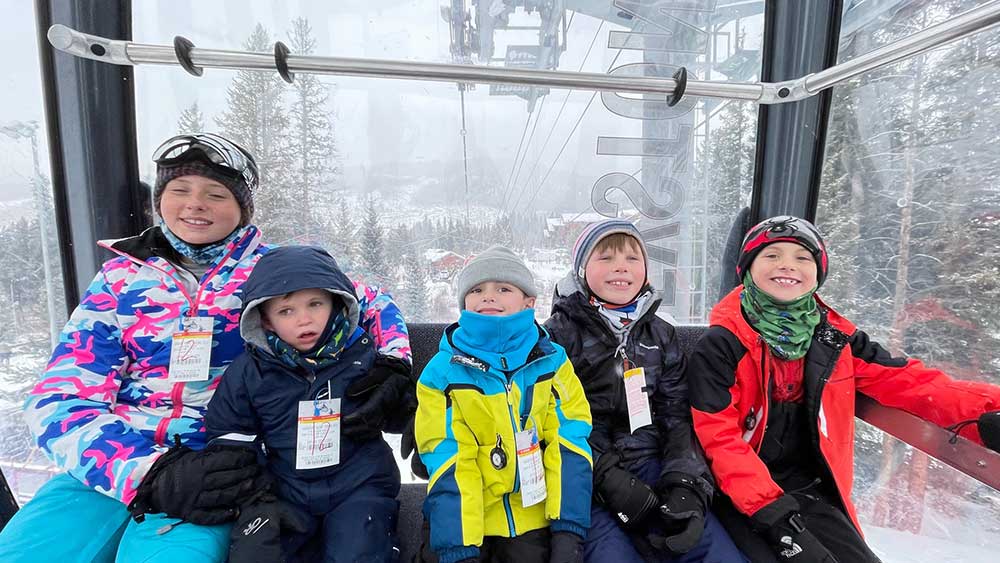 One example of facing it head on in the Shy family is to bring Jennifer and the five kids on a 800-plus mile ski vacation to Keystone this past winter, a trip that has been in the making for over three years now. And this particular trip warranted a visit to the KAC to get Coleman on the slopes for the first time. According to his father, the hardest part of getting him out on the hill was successfully suiting him up and into the bi-ski. But once they were gliding over the snow, the only time the smiley 6-year old got upset was when they had to take a break and stop skiing. “He wanted to just keep going,” says Matt. “I thought it was pretty funny.”

But it wasn’t all smiles for dad initially. As Coleman’s primary caretaker for the past 6 years it took a lot of trust in the professional and certified ski instructors at KAC. 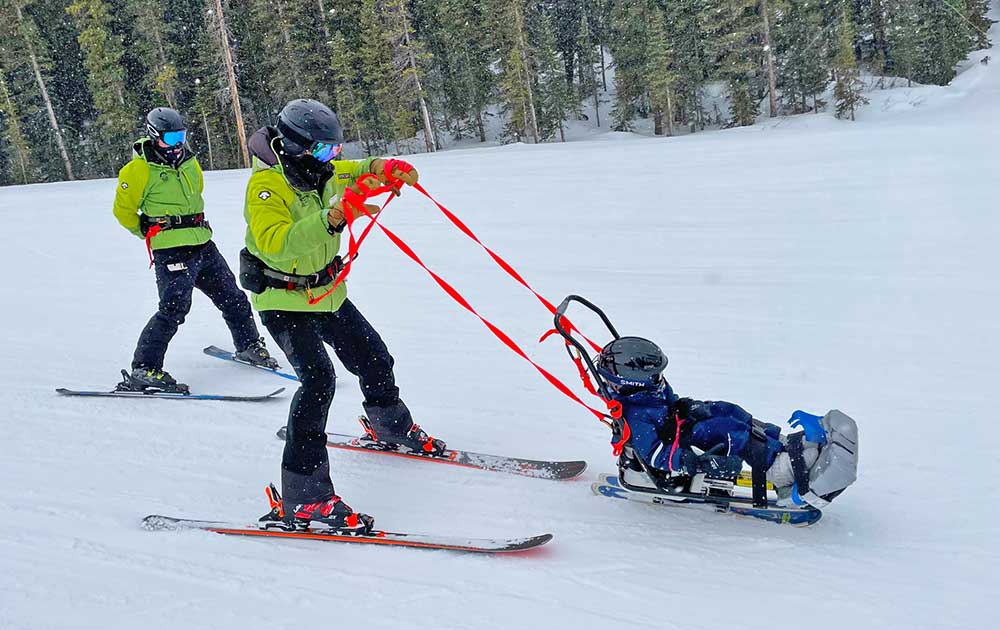 Coleman is being tethered on his adaptive ski lesson

“I kept thinking ‘I hope this is okay,’ and ‘I hope this is not a burden.’ Honestly, though, by the time we got to the top of the hill and started coming down and I was watching it, there were tears in my goggles from pure joy,” Matt fondly remembers. “Joy is not even really the right word. It was pride, thankfulness for all things. When you have a child with special needs, you just want them to experience everything that everybody else gets to do and it is pretty overwhelming when you’re seeing it happening firsthand, I was just glad that my goggles weren’t steaming up from the tears on the inside.”

Tears or no tears, dad took pride in his son’s enjoyment on the slopes and the KAC staff was doing exactly what they are trained to do. One can only imagine how freeing that feeling was, not only for Matt but for Coleman as well. Something he heaps praise upon BOEC as an entire organization and its staff and supporters for achieving.

“The thing that stood out to me the most was just the people, the staff that you have and how compassionate and caring Sean, Frank, Tyler and Taylor were towards Coleman, first and foremost,” says Matt. “It wasn’t like get in, sit down, here we go. It was truly trying to take care of his needs, first and foremost, which made me feel a lot more comfortable with how this works. They truly answered a prayer I had for several years.” 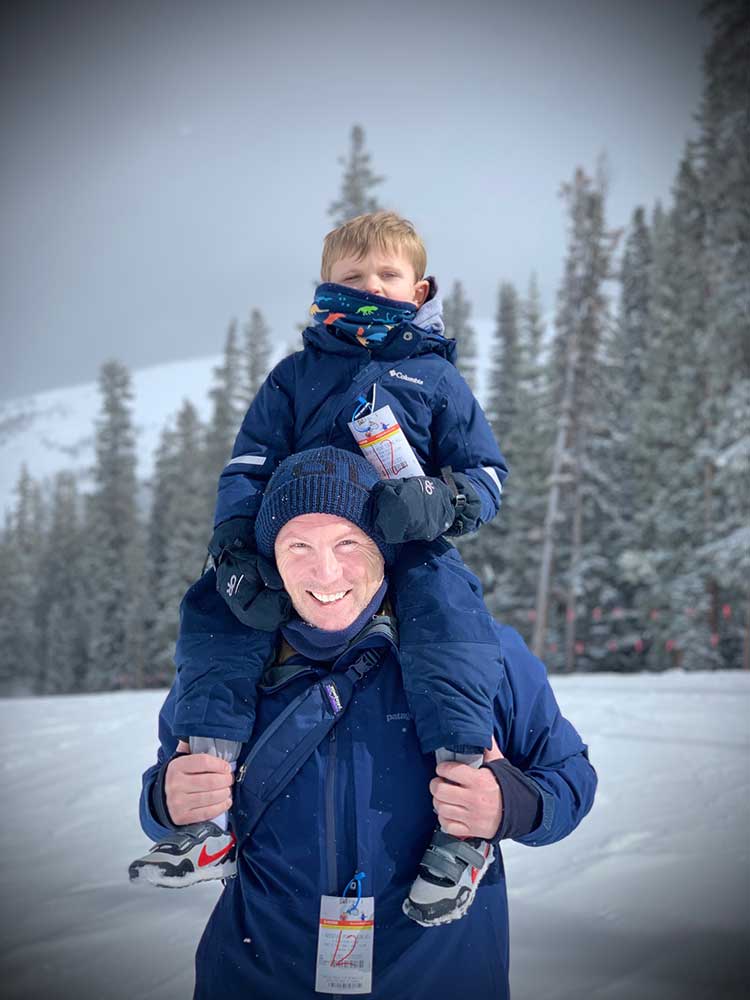 Coleman and his dad Matt

It’s that comfortable feeling that Matt points to as an extremely beneficial part of the process with Coleman skiing and life in general. He points to getting comfortable with overcoming challenges or obstacles, or uncomfortable situations, as a way to gain more confidence to tackle the next challenge.

“Getting Coleman exposure to this kind of stuff [adaptive skiing] just grows his confidence,” says Matt. “So, when we go to the next event where he’s never done it before, he’s going to just carry that confidence that he’s accomplished things in other areas that make him more suited or fit for this next challenge.”

And once again, Matt points to the staff at the Keystone Adaptive Center for making Cole’s dreams come true.

“The thing I walked away with was wow, what big hearts these people have,” Matt recollects. “And after seeing them go down the mountain I was like what big muscles they have to be doing this too,” he chuckles. “It’s not easy navigating a kid, much less an adult, down the slopes. That was impressive to me. And then of course just the fact that there’s a resource like this available for people to experience something that may not have otherwise happened. It really makes it an accessible experience, not just for the participant but for the whole family too.” 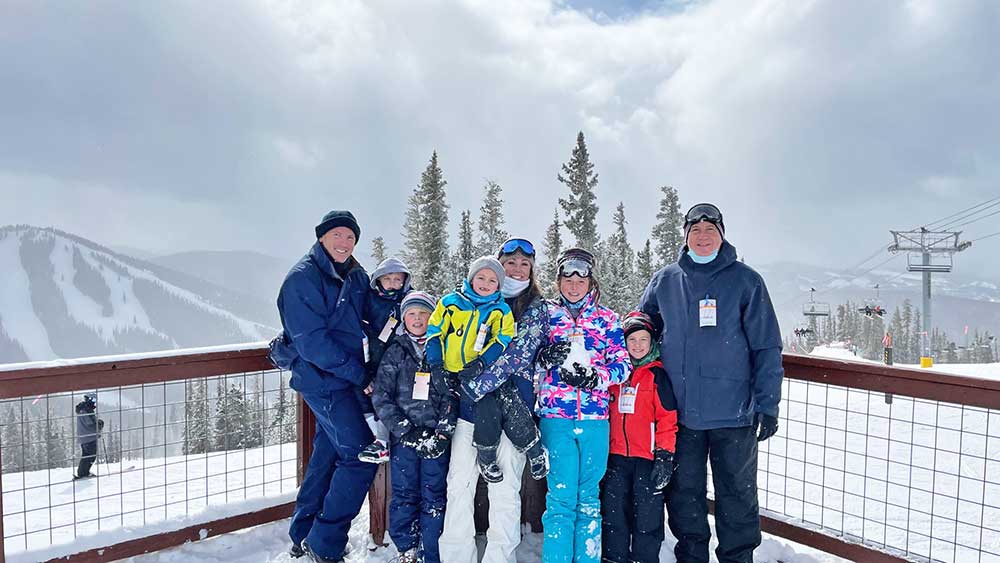 The entire family was able to help cheer Coleman on, especially his brother Brooks. Dad recounts, “When Brooks saw Coleman, he was more proud of his brother than he was of himself. Brooks went down his first blue run and he was pretty pumped up, but he was more excited to see Coleman go down the mountain. I think we all were.”

That feeling of pride includes BOEC staff, volunteers and interns who all get to relish in this experience that is so memorable for the entire family.. In fact, these kinds of experiences are really why we do what we do. We like to call this our extended family and Matt Shy is quick to send a plea to others to do the same thing for their family member with a disability or special need. 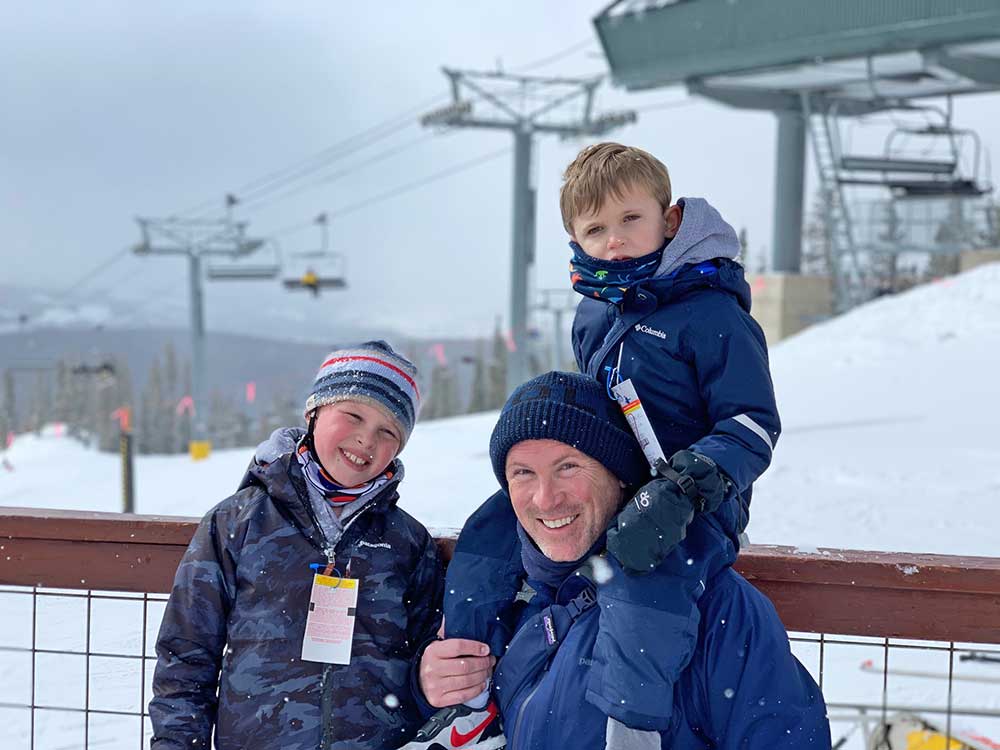 “It’s one of the best experiences ever and honestly I couldn’t do it by myself,” he says.” “If somebody asked me I would say you’ve got to do it, you’ve got to do it at least once. The team at the KAC really, really just made everything so simple. It was turnkey and the compassion and the care really made me feel super comfortable. It’s better than any theme park I’ve ever been to.”

“God Bless the work you’re doing,” says Matt. “I’m a believer in the difference it makes in this world.”