Finnegan Rudersdorf: Never Give Up!

Breckenridge Outdoor Education Center (BOEC) adaptive ski participant, Finnegan Rudersdorf, was only four years old when diagnosed with a genetic disorder so rare it is believed there are fewer than 100 cases in the world. However, “Finny,” with the support of his family and the BOEC, does not let GNB1 syndrome hold him back or prevent him from being as active as possible. This mutation of the GNB1 gene is a relatively new and extremely rare disorder and caused parents, Morgan and Patrick, many years of uncertainty without having an actual diagnosis. But, with a little bit of patience and a bunch of perseverance, they ultimately found the answers they were looking for. 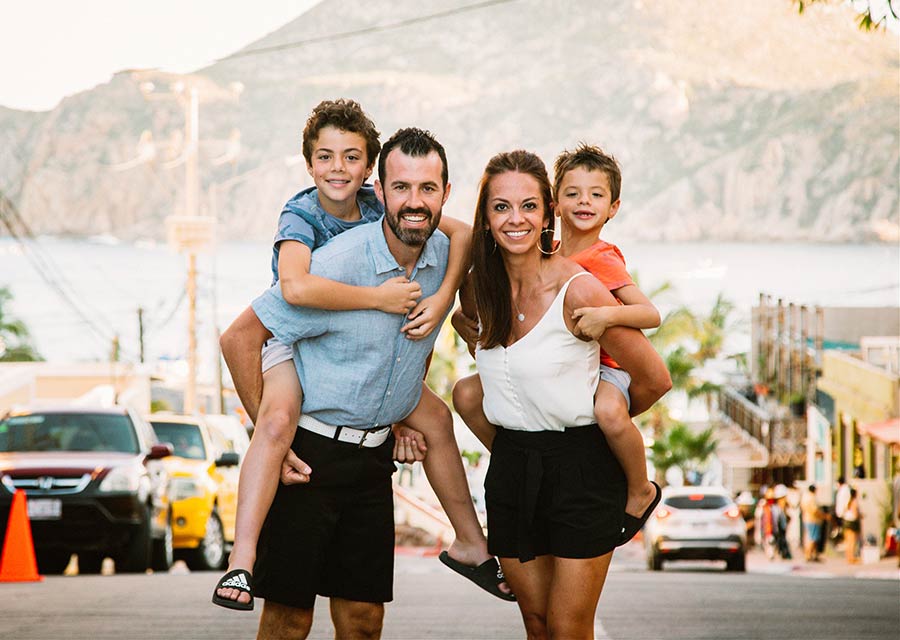 Finnegan (far right) and his family on vacation

Both physicians, Morgan Swank, a high-risk obstetrician (OB), and father, Patrick Rudersdorf a cardiothoracic surgeon, realized something was amiss with baby “Finny” at a young age. In comparing Finnegan to their first child, Patrick, and the various milestones that Finny wasn’t meeting, they started to search for answers. Frustratingly, the tests were non-diagnostic time and time again. These were challenging times for the family, something not lost on Morgan to this day.

“Neither my husband nor I are in pediatric specialties, but we knew enough that it was really, really scary,” remembers Morgan. “He had different biopsies and MRIs, and everything was coming back negative, but it was very clear that there was something atypical going on.” 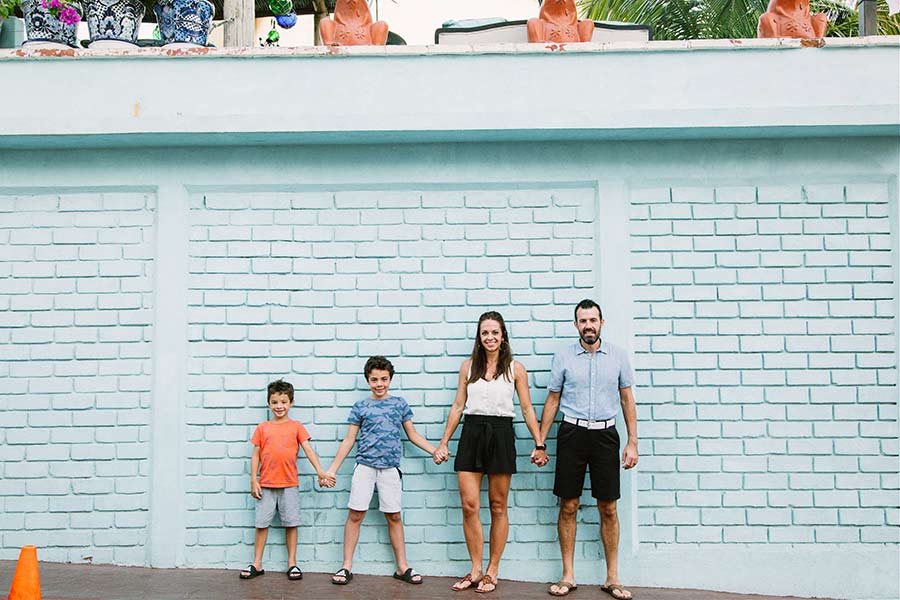 The entire family poses for a picture

The family has lived in Golden, Colorado for nearly 6 years, but wasn’t until Finny was five years old that they finally received an answer. Finny and his parents underwent one final test, something called whole exome sequencing, a blood test that sequences and maps every gene and base pair in the body… and he was positive for something called GNB1 related disorder which aligned with his myriad of symptoms perfectly. They now had an answer, but this was just the beginning of the long road ahead for Finn and his family. 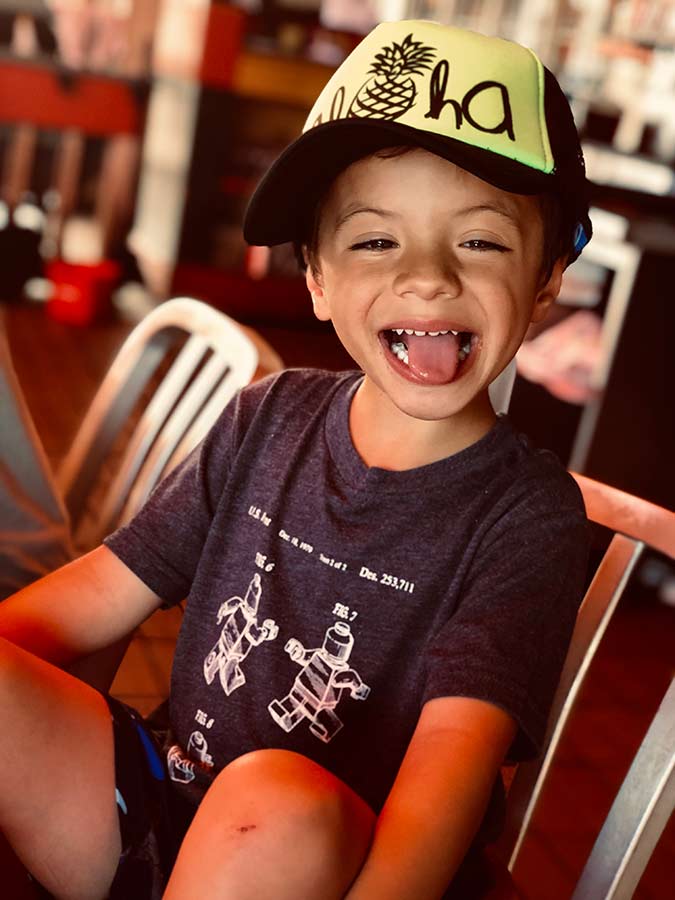 The process of moving forward was finally able to begin. While there’s no cure for GNB1 Syndrome, the disease affects everyone differently. All things considered, Finny seems to have been pretty fortunate thus far in regards to the presentation of his GNB1 diagnosis and the symptoms it has caused for him. While it causes his muscles to be weak (hypotonia), joints to be loose, a hearing impairment, and some jumbled speech (apraxia), he doesn’t experience the single greatest commonality of those with the syndrome, epilepsy, and its associated seizures. However, that does not mean he doesn’t have a mountain to climb every day of his life, it ultimately just comes down to how he decides to tackle that mountain. Whether it be on skis or on foot, this impressive 6-year-old doesn’t let anything stop him from overcoming his disability. 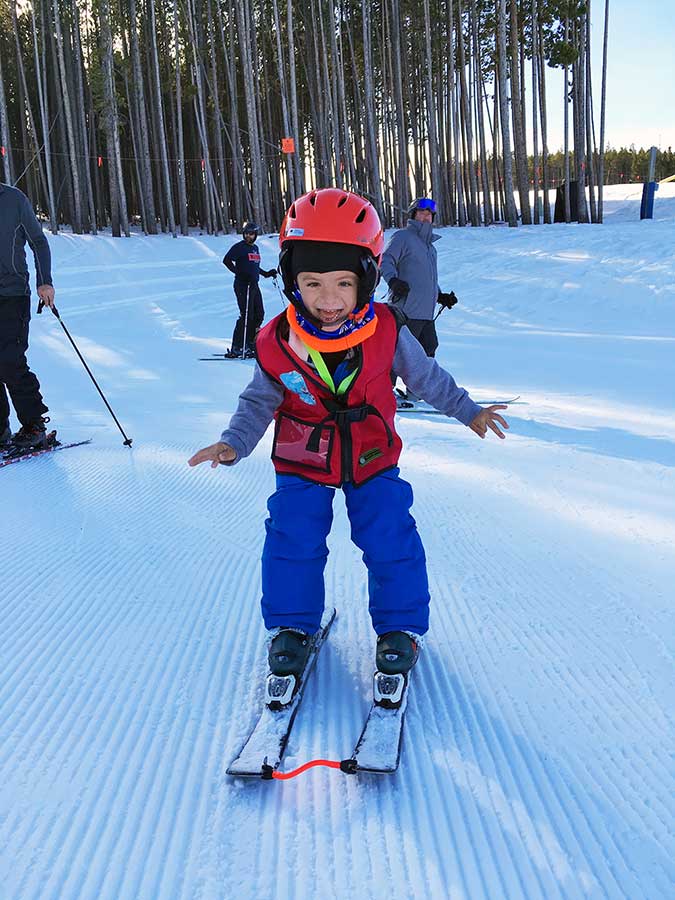 “With a lot of genetic disorders like this, there is a variable expression of how it presents,” says Morgan. “That has played a role in how fortunate he is, but I would give most of the credit to him and his never quit attitude. I’ve never known a kid that has the perseverance and attitude that he has. He can write his alphabet and I never thought he’d even be able to comfortably hold a pen. His progress is a testament to him and his endless effort.”

And that endless effort that Finn gives every day of his life includes taking part in Mixed Martial Arts (MMA), playing soccer and golf, swimming, hiking, and skiing with the BOEC. Now in his third season with BOEC’s Adaptive Ski & Snowboard Program, everyone from his instructors to his parents can see what a difference skiing has made in his life. Not only has it improved his confidence, but his strength and coordination have been enhanced as well. 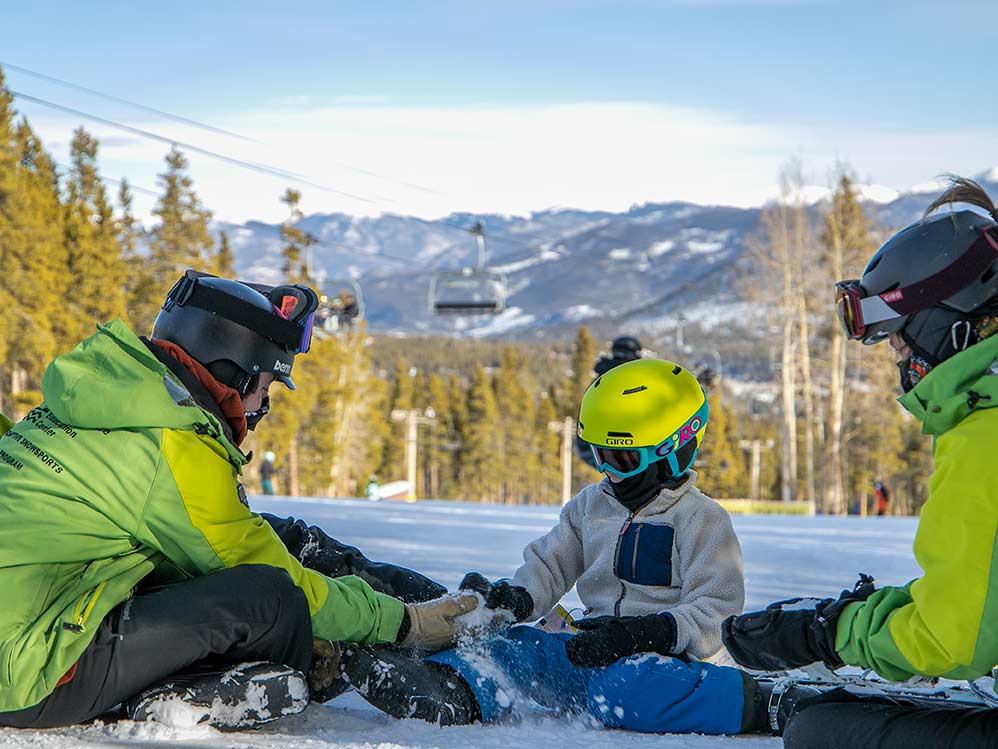 Finn playing in the snow during a mid-mountain break

“Just like all of us, Finny’s confidence just goes through the roof when he’s able to master and feel that he’s doing something similar to his brother,” Morgan says. “But he also now has improved strength [from skiing] and that combined with his knowing that he can do something new, challenging and different allows him to have self-confidence in all areas of his life.”

She continues, “I see it in Finnegan in everything he does. Everything has been exceedingly more challenging for him than his brother, and he never feels sorry for himself and never quits. Sometimes I wonder if he even recognizes that it’s more challenging for him, which probably works to his advantage because he doesn’t feel sorry for himself or get a bad attitude about it.” 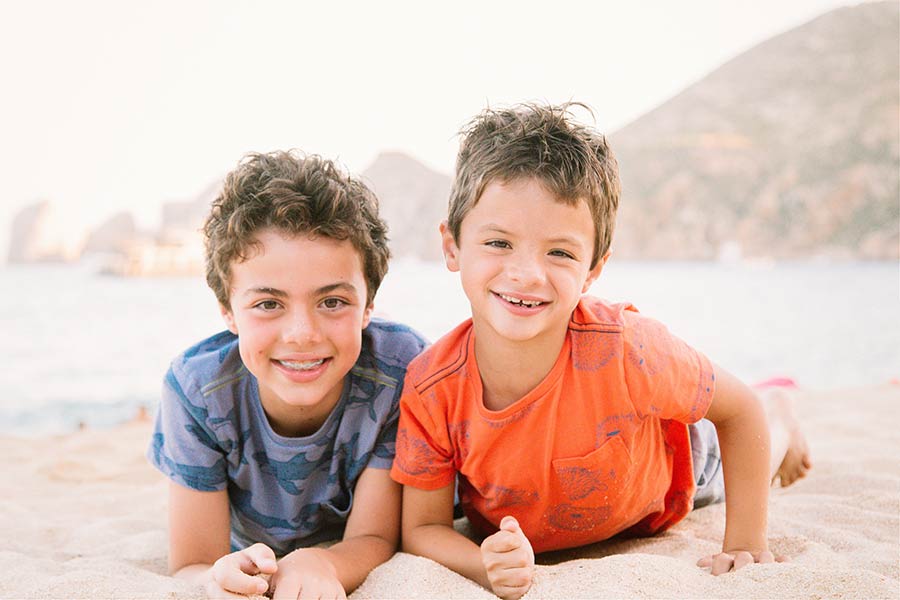 Finn and his brother Patrick

And while you can literally see his confidence and strength growing from run to run, it’s the snowball fights and games of tag during his mid-mountain skiing breaks that Finn enjoys just as much as speeding down the hill – something that Morgan directly attributes to his BOEC instructors and their unique training.

“If the BOEC didn’t exist I don’t think we would have ever been able to have Finny ski because we could not have enrolled him in a typical group lesson,” says Morgan. “Having these instructors with their special training working with kiddos with special needs has made it possible for him to ski. They are able to see and recognize when his mind wants to keep going but he’s at a point where his body is exhausted. We feel very fortunate that he can do something that we are passionate about, skiing, and being outside. This variety makes him stronger in ways that a typical occupational therapy or physical therapy session would never provide him.“ 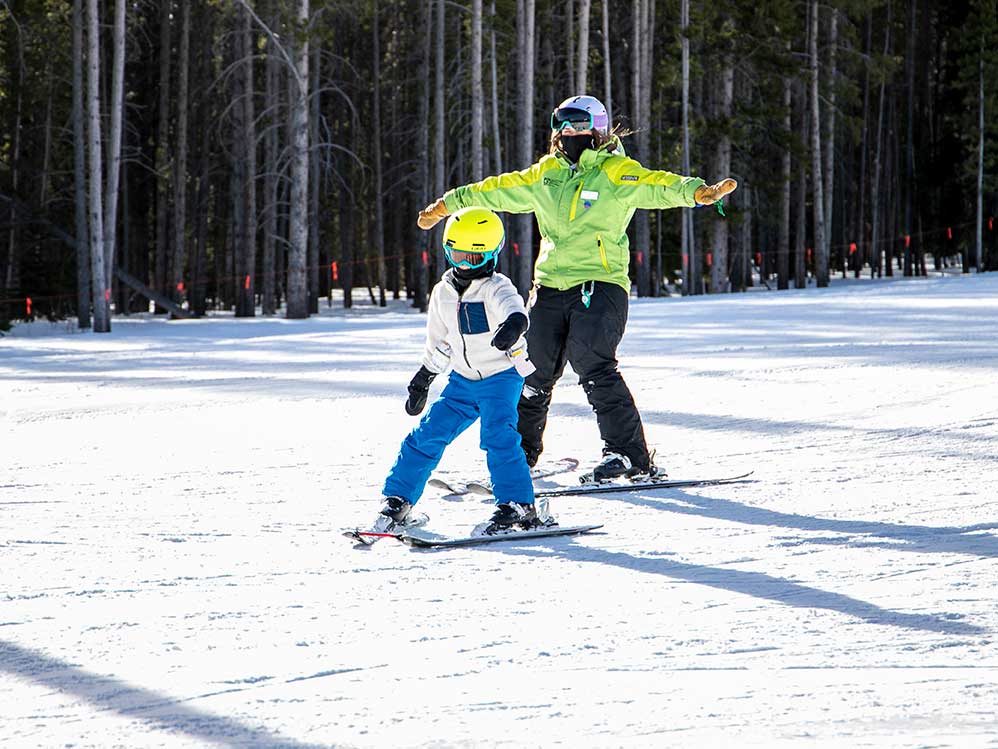 Finny and Mary enjoying the lesson

Third-year BOEC instructor Mary McAliney relishes the opportunity to get out on the hill with Finn. “He’s just like a typical 6-year-old,” she says. “He’s really excited to come out and ski and just push through what he’s had to deal with. He makes our job easy. He’s really playful, has great energy and a great attitude. It’s just been a blast getting out to ski with him.”

That attitude and self-confidence the BOEC sees on the ski hill translates to his everyday life in more ways than Finn may ever know, including the “normality” of attending the same neighborhood school as his brother and friends. The brothers walk each other into school each morning, Patrick takes “Finn-Man” – as he refers to his brother – to kindergarten and picks him up, and they see each other at recess. The importance of this kind of socialization for Finn at school and on the hill is something that is not lost on Maple Grove Elementary principal and former adaptive ski instructor, Mr. Chris Neville. 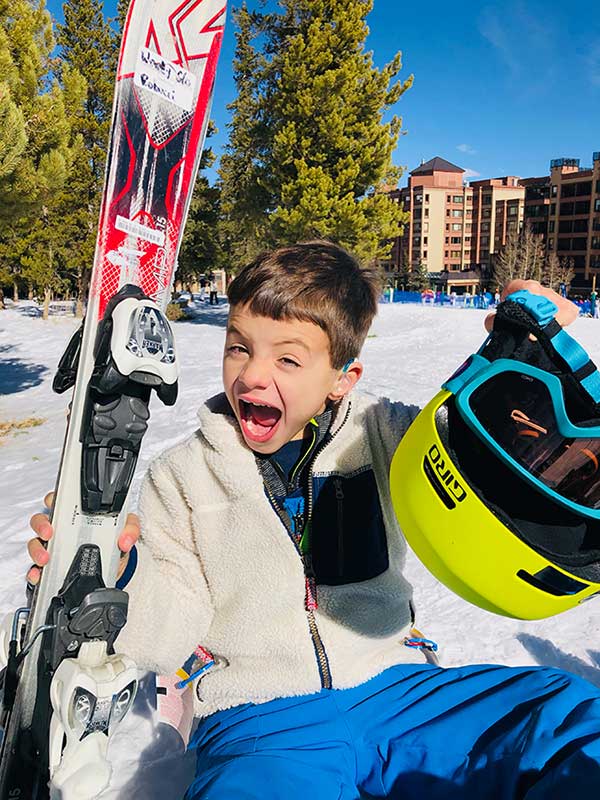 Finn is excited to get out on the hill

“Finn is a unique and special guy. He works hard to overcome the challenges he faces and approaches each day with a smile and ‘can do’ attitude,” he says. “The smile on Finn’s face when I ask him about skiing tells the whole story. In my experience, adaptive sports offer children the opportunity to build confidence, overcome challenges, and experience success regardless of ability.”

And possibly the only thing that overshadows all of these admirable qualities is his irresistible sense of humor. Knock-knock jokes seem to be his forté as they roll off his tongue effortlessly one after another. Finn also loves to watch movies – especially Star Wars with its hero named Finn, Cars because of Finn McMissile and Harry Potter with its Irish half-bloodwizard Seamus Finnigan … all famous Finns. In fact, if it wasn’t for some of his “noticeable differences,” echoing instructor Mary McAliney’s comments, Finn is really no different than any other 6-year-old boy. 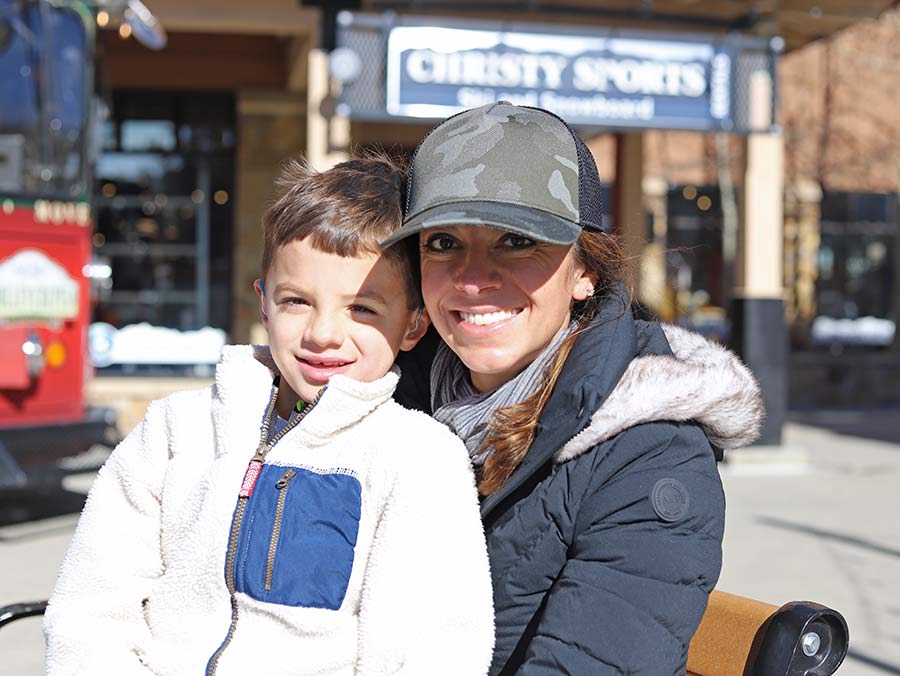 Finnegan and his mother, Morgan

So, what does the future hold for Finny? In terms of his long term prognosis, nobody really knows as this is such a new and rare disease. But his mother chooses to look at the bright side.

“We don’t know a lot, but what we do know is that he has as FAR exceeded our expectations already at age 6,” she states. “He has an infectious personality and a contagious laugh, and he brings joy to everyone he meets. Although Finny has to work extremely hard, overcoming challenges and obstacles that his peers may not understand and will never face, he is better, WE are better, because of it. His 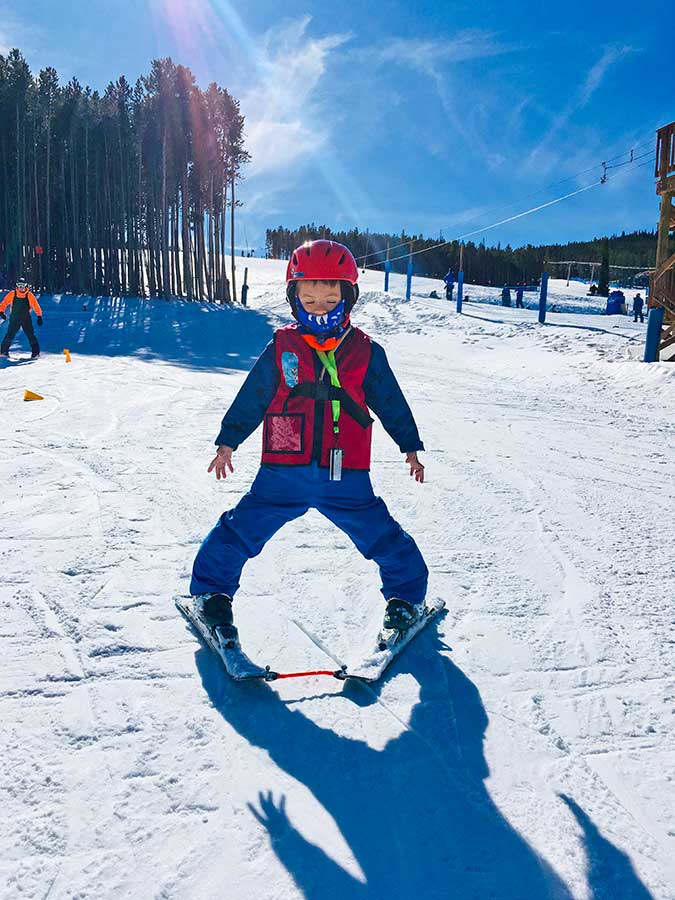 Finny in his element

perseverance has inspired those who know him well and taught us all to NEVER give up. Thank you Finny for teaching us as your parents how to love unconditionally and how to never give up, despite the number of times we may fail or fall short … NEVER GIVE UP!!”

As you can see, Finn’s perseverance and never give up attitude can be an inspiration to us all. We could all learn a thing or two from the one and only Finnegan Rudersdorf.