For 44 years the Breckenridge Outdoor Education Center (BOEC) has been in the business of providing meaningful, educational and inspiring outdoor experiences to people of all abilities. BOEC’s dedicated staff spends countless hours every day making sure that these experiences are both rewarding and meaningful to all who take part. So, if you were to strip down BOEC’s mission to its bare essentials, it really comes down to humans simply helping other humans. And that mantra extends beyond the participants all the way to the partners BOEC works with. One such partner is Angletech Cycles, a truly unique, recumbent and adaptive bike shop in Colorado Springs that shares these very same values. Something that is not lost on Angletech employee Josiah Marrs. 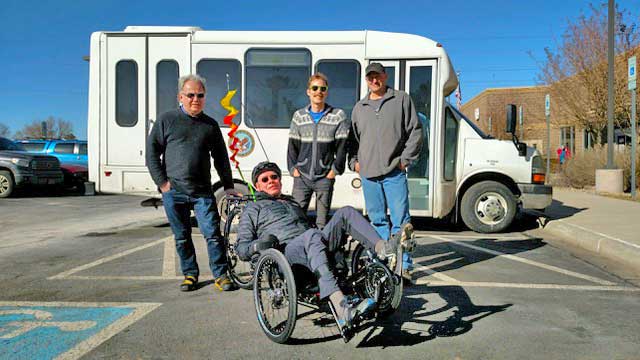 Josiah has only been with the 27-year old company for about four years now, but the Houston, Texas native was quick to realize the importance of the human connection in everything they do.

“Our mission (at Angletech) is humans. And helping all humans to have adventures without leaving anyone out,” says Marrs. “The first thing that Kelvin (shop owner) asked me in my job interview was whether I liked humans. That’s more what our business is about than the cycles. It’s the humans that ride the cycles and the relationships that we have with them over the machines themselves.”

So with this symmetry in values between the BOEC and Angletech it only seemed natural that the two organizations would join forces to create BOEC’s summer adaptive cycling program a little over 20 years ago. Kelvin Clark – “the man behind it all” – began the initial process of setting up the adaptive cycling program at the BOEC in a few steps that need to occur yearly. He first needs to figure out the participants’ necessities as far as what they will be riding. Once that is taken care of, all the cycles are delivered in a fully assembled and adjusted state before clinics are provided for the BOEC staff on how to use them. And in true irony, Josiah’s aforementioned job interview just so happened to be on a six-hour round-trip drive from Colorado Springs to Breckenridge on one such visit to the BOEC.

“He (Kelvin) wasn’t planning to hire anybody at the time but when I told him I had recumbent experience he said, ‘hey I’m driving to Breckenridge tomorrow, do you want to come with me and talk about working for Angletech,’ describes Marrs. “After a six-hour long interview in the car, here I am.” 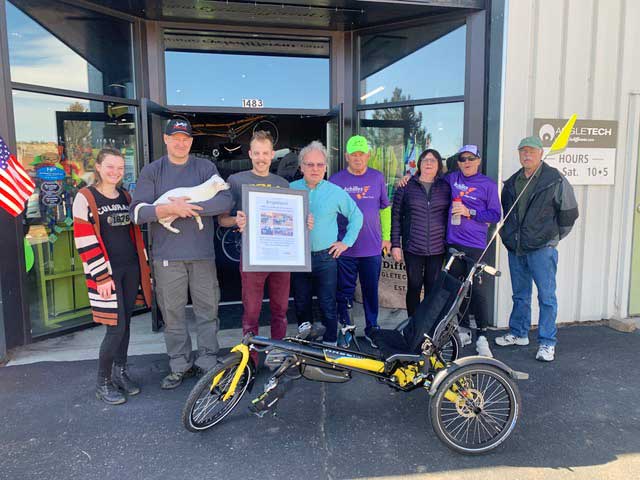 Angletech employees and customers pose in front of the shop

There’s about 90 years of recumbent experience under one roof between the four members of the Angletech team but it all started with Kelvin Clark and his foray into the cycling world at the tender age of six. He spent his childhood and teen years helping out at his family owned bike shop in Seattle before moving to Woodland Park, CO in 1992. Evidently Kelvin bleeds bike grease and drivetrains because just a year later – in 1993 – Angletech was created. While his dad’s shop was mostly focused on upright bikes, Kelvin took an experience that happened in 1979 and decided to change-up his model a bit.

“It was a gentleman who bought an Avatar 2000, which was the first recumbent Kelvin ever sold,” says Marrs. “He didn’t know anything about recumbents at the time but the gentleman wanted to buy one so Kelvin decided to learn everything there is to know about recumbent bikes. From that point forward he started to become a recumbent expert.”

Fast forward 41 years and Angletech seems to set the bar in the recumbent and adaptive cycle world. So what’s all this talk about recumbents, and what’s the difference between that and an adaptive cycle? Well, it’s really simple. A recumbent is any type of cycle that has a seat back support system where one’s torso is leaning against some sort of back support. Recumbents come in both two-wheel and three-wheel versions but this is where the adaptive distinction sets the two apart. Two-wheel recumbents are really meant to serve populations with special needs such as back or neck discomfort while three-wheel “trikes” actually take balance out of the equation so one doesn’t have to hold it up with their own body. And according to Marrs, about 90 percent of what they sell today is in the trike category as opposed to 90 percent two-wheelers when he got his start in the industry 13 years ago. So what is it about recumbents and adaptive cycles that has piqued the interest of these three dedicated cycle enthusiasts? 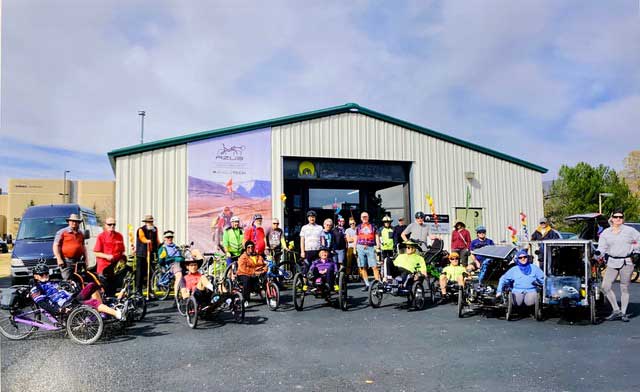 An adaptive cycling crew poses in front of Angletech

Well, remember the humans helping humans motif? This is such a powerful motivator in some people that it truly becomes a passion. For employees of the BOEC and Angletech it’s not only a passion but has actually become a lifestyle. Providing the things that people love about cycling – adventure, shared experience, and exercise – while minimizing the challenges – including discomfort, hills, and headwinds – is the name of the game for Josiah and the rest of the team.

“Cycling can be a really profound experience,” states Marrs. “It may be the only time of one’s day when they’re able to forget about the endless stream of what they have to do later or what things they didn’t finish doing. They’re just able to take themselves out of their own head and live in the moment. When you’re cycling, you’re just experiencing what’s around you, living in the present moment. It’s a very powerful thing.”

And it becomes even more powerful when you put someone on a bike that has either never ridden one before because of a disability/special need, or is riding for the first time after a debilitating injury. Josiah points to a customer named Dan as the perfect example of this power. Dan has limited strength in his legs to the point where he can only walk with the assistance of crutches, so he is accustomed to riding hand cycles due to his lack of leg strength. However, during the course of an Angletech hand cycle demo, they learned that he didn’t actually need a hand cycle but instead could use a regular pedal cycle with an assist motor to amplify his leg strength. Everything Dan has done for the past 30 years involved using his shoulders which created some wear and tear as a result. While Dan came in with the idea of purchasing another hand cycle, he experienced a life changing moment when he learned he could be riding an adaptive trike. 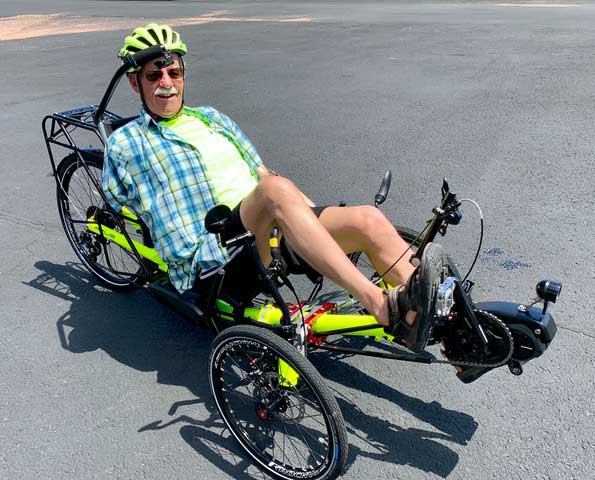 An Angletech customer is very happy with his new ride

“This was such a big deal for him that he actually cried on his ride because he wasn’t looking forward to another hand cycle,” says Marrs as he recounts the experience. “It was just a beautiful thing to have someone come into the shop and just be able to ride again and use his legs in a way that he hadn’t been able to in 30 years. It was a very powerful moment.”

In a way, stories such as Dan’s are really what makes Angletech tick. Humans helping humans. So when it comes to an ideal Angletech customer, Josiah has some very choice words.

“Our best customers are the ones that keep an open mind because a lot of folks come in here having done a lot of research,” he says. “While there’s certainly a lot of things to gleam off the internet about recumbents, we ask you to come in here with a blank slate about everything and let the process of riding things determine what you need. Experience is what it’s all about and you don’t get experience from reading forums.”

So, just like Dan, when a prospective Angletech client visits the facility for the first time, they seem to get the royal treatment. Customers come in for a lengthy two-hour experience in hopes of finding the right bike to fit their specific needs. They ride a variety of different cycles and at the end of their two-hour session they’ve got a pretty good formula for a trike that will work perfectly. This could mean a lot of modifications or something built straight up out of the box depending on the person. The main thing to remember is that there are always very specific customizations to do even for people who wouldn’t necessarily consider themselves special needs. 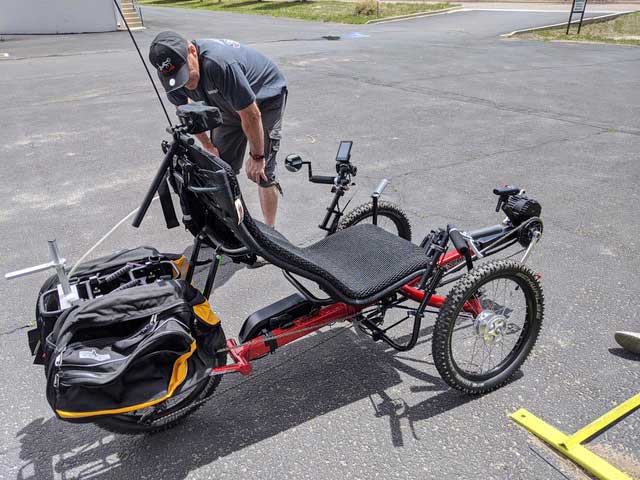 And speaking of the right bike, Angletech can customize one for anybody and everybody, hypothetically even someone in the size and weight range of Shaquille O’Neal. In fact, Josiah spent some time designing a bike that could fit the 7-foot-1, 325lb former professional basketball player as a sort of experiment to see if it could even be done.

“He’s (Shaq) a person that has probably never had a cycle his whole life that fit him,” says Marrs. “He’s not necessarily special needs but we have a cycle in the building that I put his dimensions on that would 100 percent fit him proportionately. It was just an experiment but it’s a proportionately giant trike for a giant human being.”

Whether it’s Shaq or Verne Troyer (from Austin Powers), Angletech can assemble a cycle that meets just about any specifications. The company hasn’t actually set up a little person – or Shaq – on a cycle yet, but no matter what your dimensions are, if it’s your first time considering a recumbent Josiah has some great advice for you.

“If you’re getting on a recumbent for the first time it’s not a bad idea to get involved with a local adaptive group because they’ll have a variety of different cycles to help you determine what kind of cycle you need,” he says. “Don’t buy a bike on other people’s opinions but ride them yourself because everyone’s body is different and everyone has a different opinion of body position. This is only something that can be learned from riding.”

And as we already mentioned, the BOEC goes through the exact same Angletech process, something that is an extremely valuable service to BOEC’s participants and staff alike.

As the recumbent world grows and changes, and the BOEC adaptive cycling program follow suit, we look forward to many more years of working with such a humane and progressive organization. Something that is reciprocated right back.

Humans helping humans, Josiah, is what we’re all about.