Recycle Sports Gives Back to BOEC

In Summit County where there are quite a number of great ski and snowboard shops, Recycle Sports in Frisco sets itself apart as one of the only local consignment sports shops where you can find new and used gear. The owners of Recycle Sports, Steve and Janet Van Wieringen, pour their hearts into providing quality gear and equipment to their customers, as well as giving back to the community that they have been a part of for over a decade. Since 2009, these Summit County staples have been tremendous supporters of the Breckenridge Outdoor Education Center (BOEC), contributing a percentage of their sales every year to support BOEC programming. Since 2009, Recycle Sports has donated over $33,000 to BOEC. 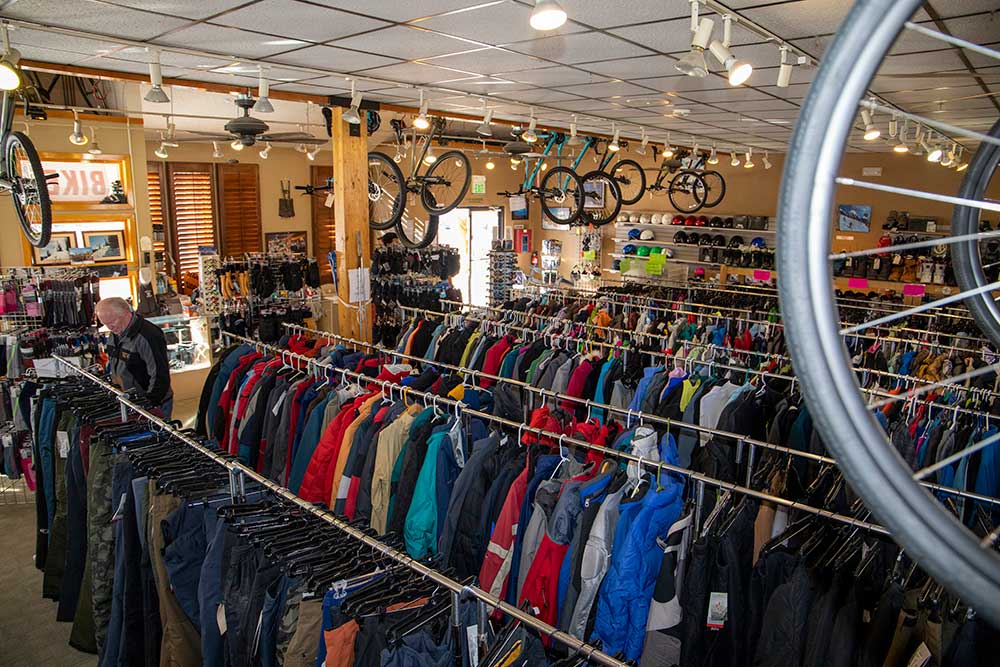 So, how does it work? When a customer brings gently used ski and outdoor gear to Recycle Sports, one has the option to either receive a portion of the sales from their used items once sold, or to donate that portion to BOEC. Par for the course for Summit County, several community members choose to dedicate their percentage of the sale to the BOEC. When this is the case, Recycle Sports can issue tax-deductible receipts right at the counter. This year, Recycle Sport’s contribution was a record breaking $7,126. Steve Van Wieringen declares that next year they are shooting for at least $7,500.

When asked why Steve and Janet are so generous to BOEC, their eyes well up a bit. “BOEC has a very special place in our hearts. It’s just a miracle what BOEC does to help people,” they shared.

“Just like our son Neil who was a freestyle skier and who was always helping everyone on the slopes. He was like a cat out there,” Steve declared. “He could twist and spin and jump in any which way and then somehow land on his feet.” 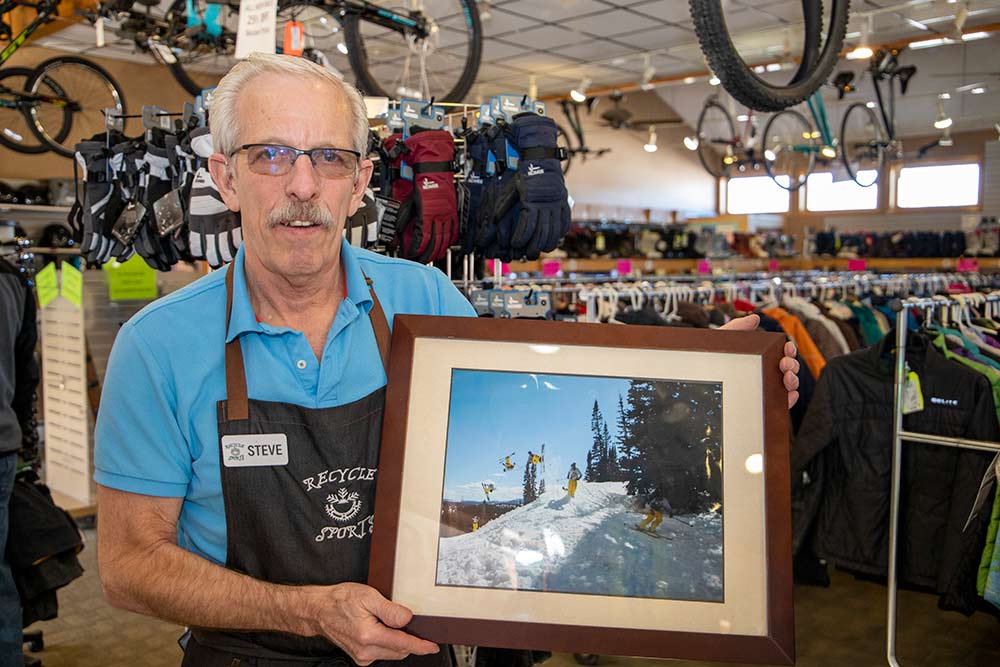 A time-lapse of Neil back-flipping off a cliff at Arapahoe Basin Ski Resort hangs proudly in the store. Unfortunately, however, Neil faced some difficult times and passed away in 2010. Janet explains that Neil embodied the values of BOEC, always willing to help those who are disadvantaged get out there and give it their best shot. In fact, Neil’s best friend Dave Poole was in a ski accident in 2008 which left him paralyzed from the waist down. Neil made it his goal to ensure his best friend still experienced the joy of outdoor recreation just like he could. At first, Neil would strap Dave to his back so they could ski down the hill together. Once Dave learned to bi-ski, they were unstoppable once again on the slopes.

“We all realized the importance of helping people with disabilities overcome their hardship,” said Steve. “This is why we give back to the BOEC in honor of Neil.”

Undoubtedly, Neil’s spirit lives on through Janet and Steve’s generosity to BOEC, something Neil would be extremely proud of.

Several individuals have inspired Steve and Janet to contribute to BOEC including Jim Martinson, a Vietnam veteran who lost both of his legs in an explosion in the line of duty in 1968. As Steve shared, Jim was in much distress after losing his legs and went through several years of hardship trying to cope with alcohol and drugs. It was not until Jim learned how to ski again that he recovered from the loss of his limbs. The magic of the slopes more than restored him and Jim went on to become a Paralympic champion. Jim placed first in the Boston Marathon in 1984 and received Paralympic gold medals in track in 1980 and 1984. He also developed, The Shadow, the first mono-ski which allowed users to get on and off the chairlift independently and founded Magic In Motion, a company which manufactured an array of adaptive equipment for competition. In 1992, Martinson took home another gold, this time for Downhill at the Albertville Paralympic Winter Games. Today he is renowned as the godfather of adaptive sports and has been inducted into the U.S Ski and Snowboard Hall of Fame. 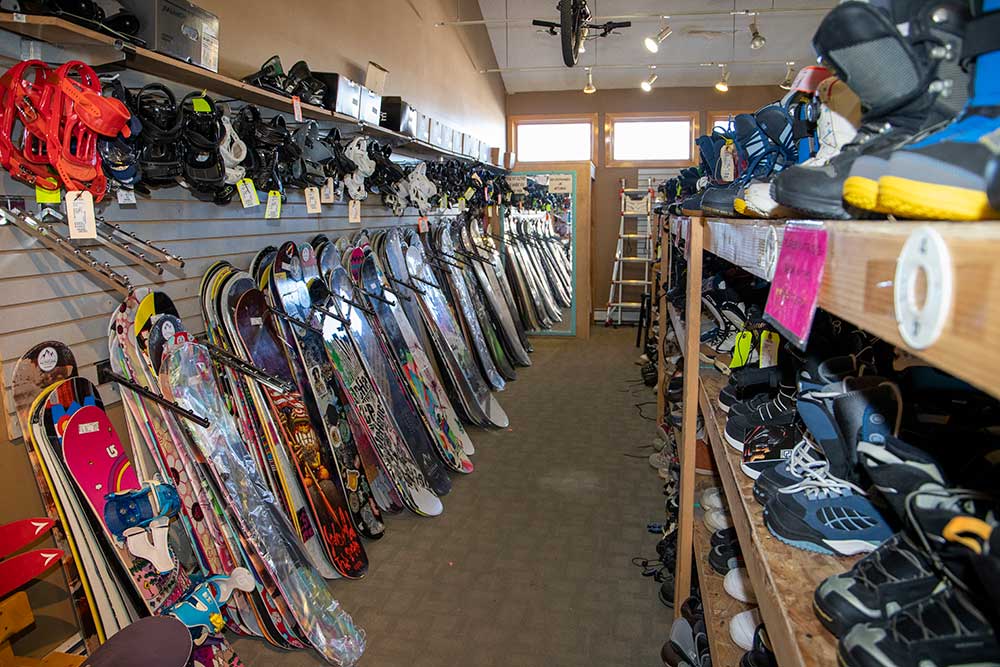 Steve and Janet give back to the community in other ways as well. At their Frisco-based store, one can find affordable and quality outdoor gear, ranging from clothing to ski and mountain biking equipment. The couple took over the store in 2008 from previous owners and made Summit County their home. Now, even their grandson, Alex works at the store. Over the past 12 years, they have shifted their focus from taking just about any kind of used gear, to being a bit more selective in taking high quality, gently used and new items offered at very reasonable prices. They have a couple techniques which help accomplish this. First, they recommend that all clothing has no tears or stains in the fabric, and all zippers and buckles work. If this is not the case, you can bring your used clothes to other thrift stores or recycle them at the Summit County Resource Allocation Park bins. Another unique feature is the “strip and ditch” where they strip old bindings off of skis and clean them up for purchase. All the used skis that are not in good enough condition to be sold in store are placed in the free bin in the back for “art projects”. So, it’s very likely that any ski or snowboard bench one might see in Summit County has passed through the doors of Recycle Sports first!

Some of the “old skis” featured in the store, however, are timeless. From the 12-foot wooden skis postmen used to strap into in the early 1900s, to the first models of planks that ski jumpers used in the 1950s, to the collection of old boots, this consignment store almost doubles as a museum. 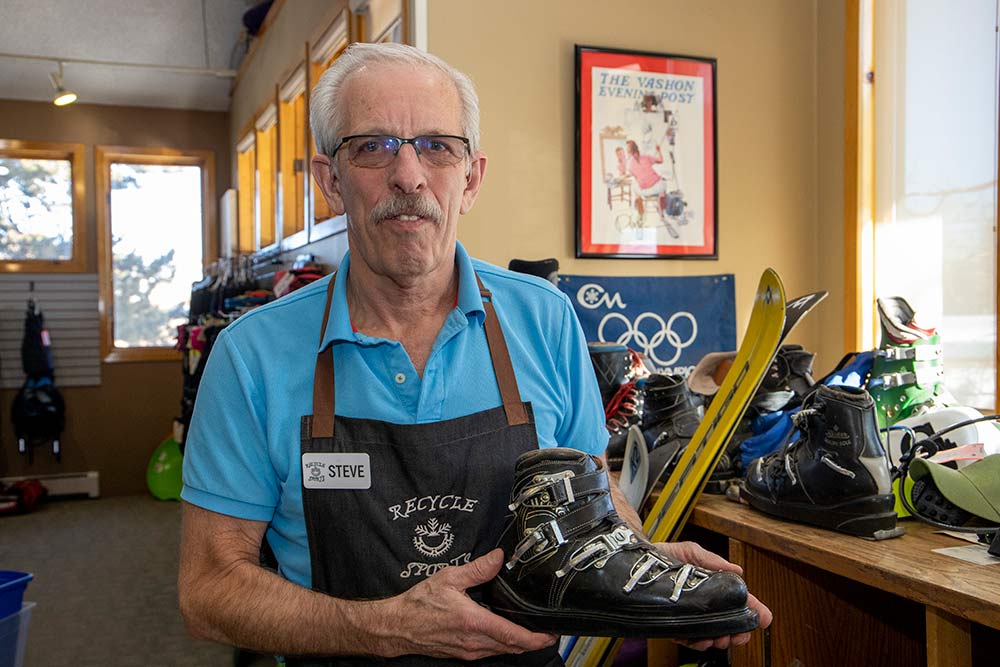 Steve and his leather buckle up boots

Steve showed the BOEC crew around the store and told us fantastic stories about all the gear collected over the years. Our favorite is a memory of Steve’s own hard work and his first pair of leather buckle up boots which cost $65 in the 1960s. Steve grew up helping his parents on a dairy farm in Washington state and when a neighbor went out of town for two weeks, Steve pulled double shifts on both farms milking their cows for $4.50 a day. This added up to $70 in savings and at 16 years old, he was able to buy brand new leather buckle boots to race down Crystal Mountain. He burst in laughter and exclaimed, “I’m already out racin’, when you are still a lacin’!” referring to the new buckles that were so much faster than the traditional lace up boots his friends had at the time.

BOEC is extremely grateful to Steve and Janet for the years of funding and dedication to our cause. BOEC doesn’t have the staff or storage to take donated ski gear, therefore we recommend you bring your used gear to Recycle Sports, which ultimately benefits BOEC in the long run.

Thank you, Recycle Sports, for the years of giving to BOEC, and here’s to many, many more.

Looking for ways to give back to BOEC? Check out our Ways to Give page. 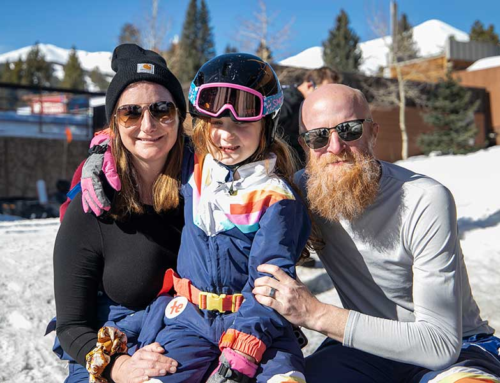