Casey Myers – I Can Do It! Adaptive Skiing and More!

It’s often been said that the magic age for learning to ski is five years old. A child around five should be able to get the basics of listening, turning, stopping and managing the lifts enough to get out of the ski school corral and onto the wide-open green runs. However, this magic number is typically reserved for able-bodied children. When it comes to those with disabilities or special needs, that magic number tends to rise in most cases. But, Colorado-native, Casey Myers, is not your average case. 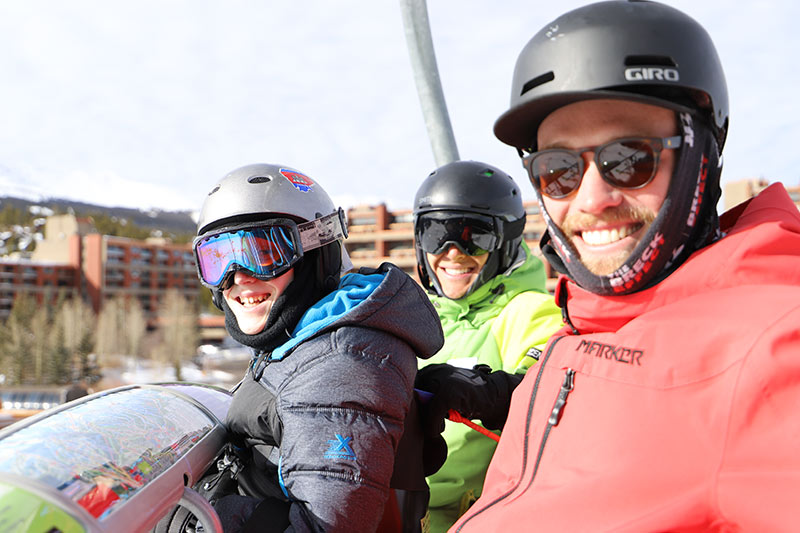 Casey, now age 16, was born 12 weeks premature with a massive tumor attached to his spine and tailbone. He weighed in at a grand total of 7 pounds, but half that weight was attributed to the tumor itself. After four grueling surgeries the tumor was removed, but Casey was left with damage to the nerves feeding his lower extremities, ultimately confining him to a wheelchair. While most parents would be devastated with such news, Casey’s father, Tim, really puts the whole situation in perspective.

“When you find out that your son is going to have some physical challenges his whole life, you think to yourself ‘oh gosh this is horrible, poor guy,’” he said. “But, we went to some support groups in the first six months and we met parents and kids that were one-hundred percent paralyzed and those with almost no emotional interaction. I just kept imagining what their life was going to be like and how easy we had it by comparison. We stopped feeling sorry for ourselves and feeling sorry for Casey pretty early on and tried to give him as normal of a life as possible.”

“Normal” was not necessarily the case for young Casey early on, however. While all the other kids his age were out running around, playing sports and enjoying the outdoors, Casey was confined to leg braces and a wheelchair. But, there was no moping around and feeling sorry for himself according to his mother, Colorado Adaptive Sports Foundation Board Member, Marni Myers, who tried to make things as normal as possible for her little boy. 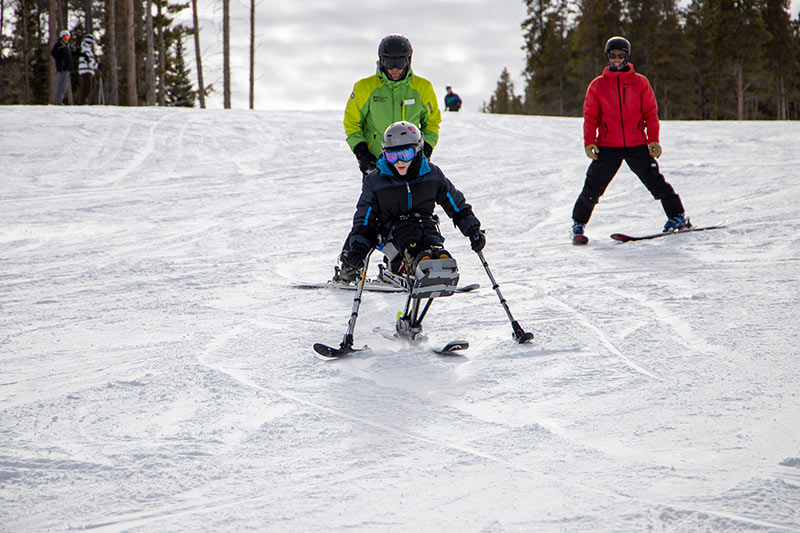 “We’ve always encouraged that he should try everything at least once, and usually we try it at least six times,” she said with a chuckle. “At a very young age, the hardest thing I saw in him was trying to walk. He would put on his leg braces and he would side-step the couch and give me all these pouty faces. But, then all of a sudden, it became easier and easier and then we would put another challenge in his way. We’ve always promoted tough love. Anytime he says ‘can you get this for me’ we say ‘well we could, but should we, because we know you can do it?’”

But, Casey doesn’t necessarily consider this a tough love approach per se. He is wise beyond his years in being able to comprehend the situation put in front of him and has a profound appreciation for how his parents have approached his disability.

“Tough love has definitely helped to get me where I am today, but my parents have also been super patient,” he said. “Yea they say ‘okay let’s get this going,’ but I think the patience really, really helped. I wasn’t going to get it right away, but they kept encouraging me to try. It’s tough love, but sweet love. A little mix of both.”

And this “tough love” or “sweet love” approach – however you want to refer to it – has certainly paid off. At the tender age of five, the dynamo started learning to ski with the Breckenridge Outdoor Education Center (BOEC), jump-starting a journey full of achievements that has led him to even greater heights. Once again, Casey put all of this into a perspective usually bestowed upon adults. 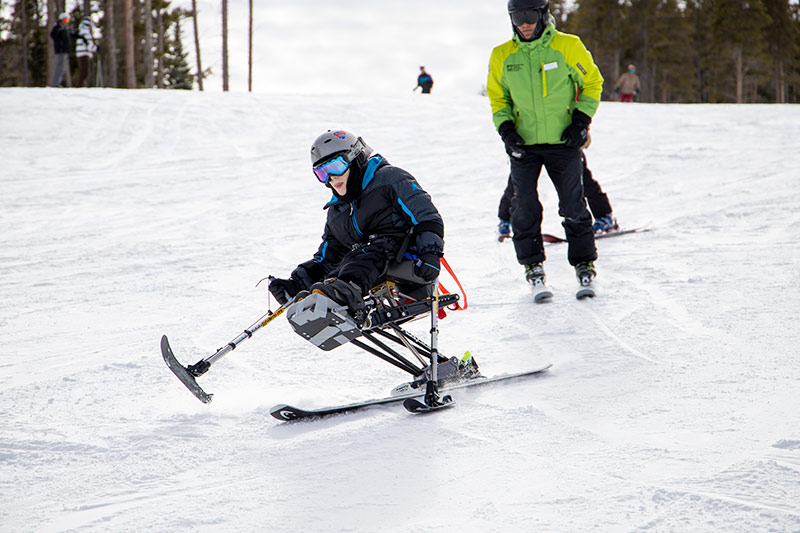 “Before I was even thinking about sports, I assumed skiing was just for people who can walk,” he said. “Then when I found the BOEC, I said ‘wait a second, I can do this too.’ It’s just that mindset of starting out young and saying to yourself this is new to me and I’m going to try this out rather than saying ‘I know I can’t do this.’”

And Casey ultimately credits BOEC for establishing his “I can do it” attitude.

“The BOEC treats you the same as they would anyone else and they ask questions in a way that doesn’t make you feel outed,” quipped Casey. “It’s a ‘how can I help you’ attitude rather than ‘will this change affect us’ mentality.”

While BOEC’s mission is to provide meaningful, educational and inspiring outdoor experiences to those with disabilities and special needs, the long-term goal is ultimately to teach these individuals to become more independent, resilient, and self-sufficient. Casey Myers is one such example. In his case, adaptive skiing with BOEC led to sled hockey and a whole host of other “I can do it” examples of self-sufficiency. Casey’s grandfather, Tom Myers, attributes his grandson’s initial experience with BOEC for shaping this attitude which still remains intact today.

“I credit BOEC because they were the first to help shape Casey’s attitude. It’s difficult learning to ski in general, but it’s particularly difficult learning to ski if you’re disabled,” said Tom. “It all started with his parents, but it certainly is the attitude of BOEC, and if it wasn’t for his skiing, I don’t know that he would be doing all these other things that he’s doing today. The fact that he started out with something that was so difficult and he conquered that … I am sure that had some effect on him getting into sled hockey and wheelchair basketball.” 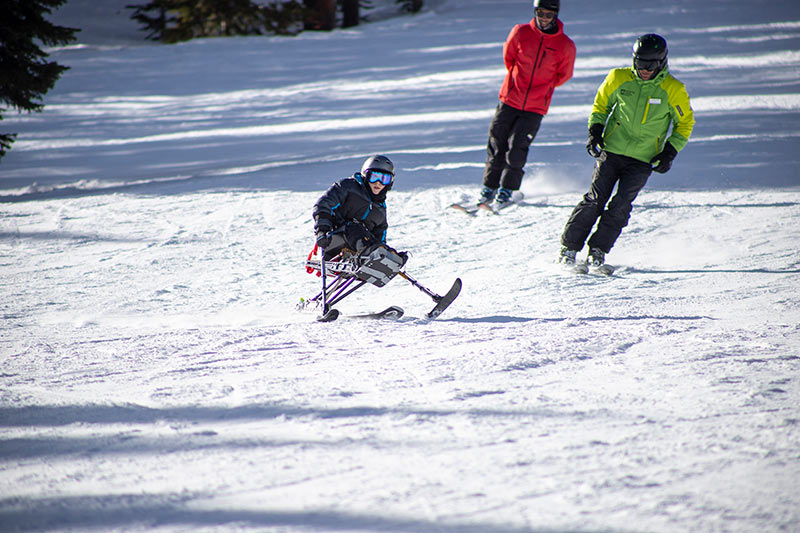 And it is because of what his grandson learned while at BOEC, Tom – a member of the Breckenridge Mountain Rotary Club – makes sure that every year BOEC receives a $1,000 donation in honor of Casey so that other like participants have the chance to find the same inspiration and attitude within themselves.

“I was in charge of fundraising with the Rotary for a couple years and had a little say in where the money went,” said the elder Myers. “I definitely wanted some funds to go to BOEC because of everything they’ve done for Casey.”

As you can see, Casey is a wonderful example of grit, determination, perseverance and passion. He took what he learned from his very first adaptive ski lesson with BOEC and found the inspiration to apply this attitude to every aspect of his life. Especially when it comes to sled hockey. Not only did the team captain take home two National Sled Hockey Championships with his Colorado Sled Hockey team, the Lil Avs, in 2016 and 2019, but he displayed some extra determination in the 2016 championship game. After helping his team through the three-day preliminary series and semi-finals with two goals and five assists as a forward, Casey showcased his “can do” attitude by switching to defense against the undefeated Nashville Sled Preds, blocking two shots en route to the victory! 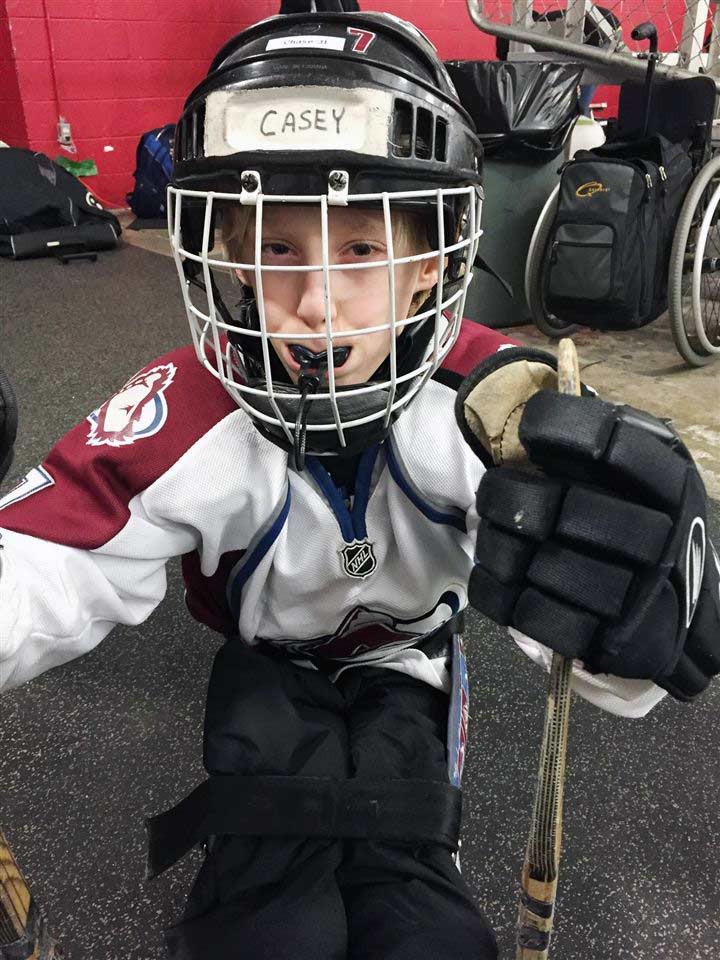 “I have speed, and at that time we needed a speedy defense,” Casey said. “Using my speed, I was able to get there to support the goalie because he has a hard disability to deal with which limits his movement and reaction time. Having me there to help him definitely upped the game a little bit.”

Tim Myers also has a profound appreciation for what sled hockey has meant to his son.

“In his hockey club he’s got five Olympians on his team. So he has inspirations, he has mentors and idols to look up to and inspire him,” he said. “Casey can see what they’re accomplishing as adults and say ‘hey why not me,’ because he can see it firsthand.”

While Casey doesn’t necessarily see himself as different than anyone else, he finds solace in his sled hockey community because everyone has some sort of disability and they can relate to and understand one another in a way that others just can’t.

“All of my classmates at Colorado Academy (CA) try to understand me, and they do it pretty well, but it’s not the same as when you’re with someone who’s in the exact same position as you,” stated Casey. So it’s really cool to have that separate (sled hockey) community because we can really connect and relate to one another.” 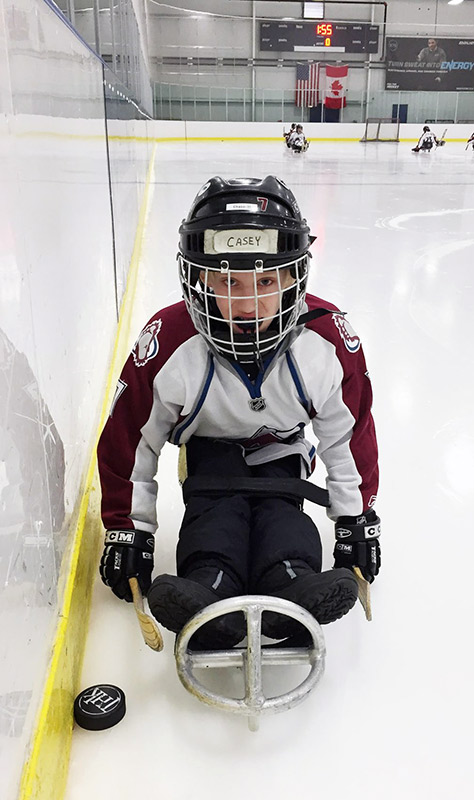 One of Casey’s other communities is the aforementioned Colorado Academy. Prior to Casey enrolling at CA they had never had a disabled student, but once again he didn’t let that stop him from breaking the barrier. The school installed ramps and automatic doors to accommodate Casey and his needs.

And Casey once again finds a way to see the good in it all.

“We have a big mission statement that we look at,” he says. “Inclusivity is one of the traits, so I think CA embodies that really well, and from the very beginning everyone treated me like I was the same and they didn’t really pay much attention to my disabilities.”

As you can see, this blond-hair, blue-eyed wonder has adapted to this world pretty darn well. In addition to skiing, sled hockey and wheelchair basketball, he enjoys hand cycling, attending kayaking clinics, playing the violin, and even considers himself quite the thespian. In fact, sled hockey and skiing aside, Casey sees himself going in an entirely different direction in the future.

“I’d love to continue doing sports into college. I have a strong feeling that I’m going to continue hockey and come out to BOEC and ski a little bit when I can,” he said. “However, I really also want to go into theater in college and hope to make it big on Broadway. My mindset is why can’t a disabled person be on Broadway. There is one person on Broadway who is disabled, Ali Stroker. So, when she got on Broadway I figured I can do it too.” 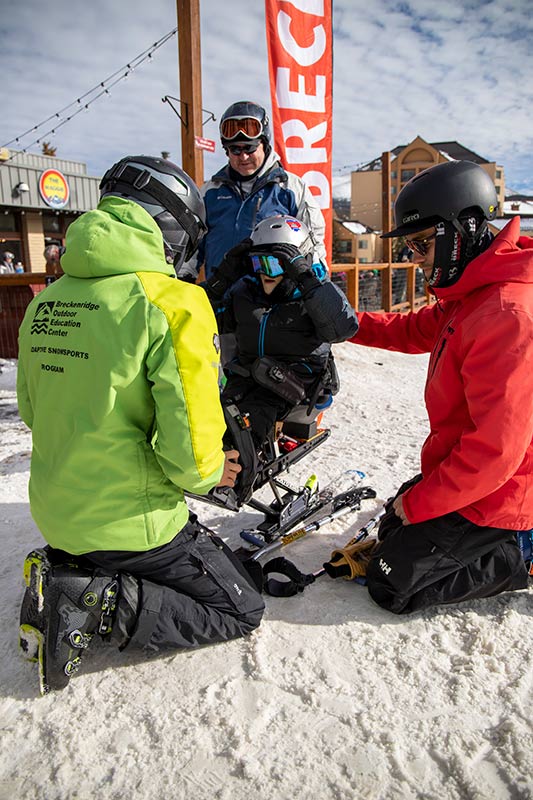 The sky’s the limit for this wonder kid. He’s smart, strong, motivated and a glowing example of what we should all strive to be. When asked about how he does it, Casey replies “What definitely helps me is being an optimist in all these situations. Instead of looking at it as ‘I’m in a wheelchair,’ I say ‘what are my advantages here.’”

As far as his family is concerned, they expect nothing less from Casey.

“He’s a tough kid and enjoys showing naysayers he can do something like walking on his hands or pulling 100 push-ups out of nowhere,” said Marni. “He is our hero, and we learn from him on a daily basis.”

“He’s just a normal kid,” said Grandpa Myers. “He’s one of the happiest kids you’d ever want to meet. He always has a smile on his face.” 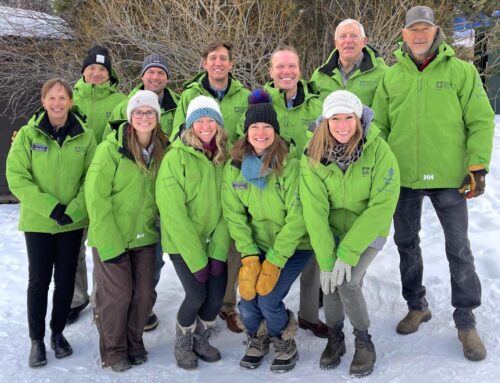 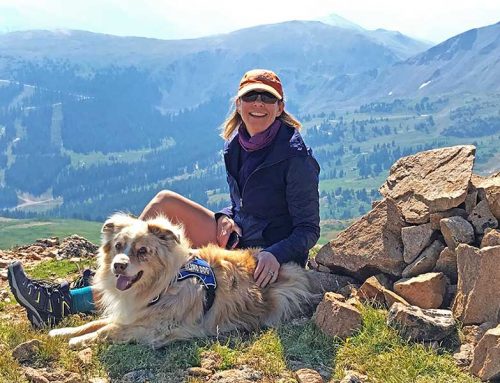