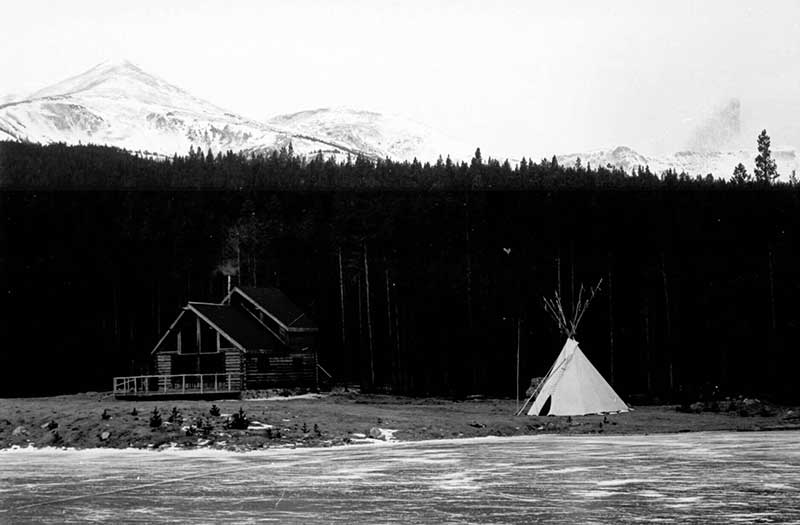 Before any formal organization was even created, Breckenridge Outdoor Education Center (BOEC) existed in spirit by Gene Dayton, a former Outward Bound Instructor who would later figure prominently in the early history of the Center. Gene, with some other local volunteers, was leading cross country ski trips for people with disabilities in Summit County as early as 1973. During this time, Gene joined forces with Olav Pedersen, a prominent figure in introducing Nordic blind skiing to the United States and oversaw the country’s first “Ski for Light” in Frisco, Colorado in 1975. After the event, several volunteers, including Dayton, James “Bobo” Burwick and David Waite, expressed an interest in continuing the spirit of the Ski for Light in Summit County. 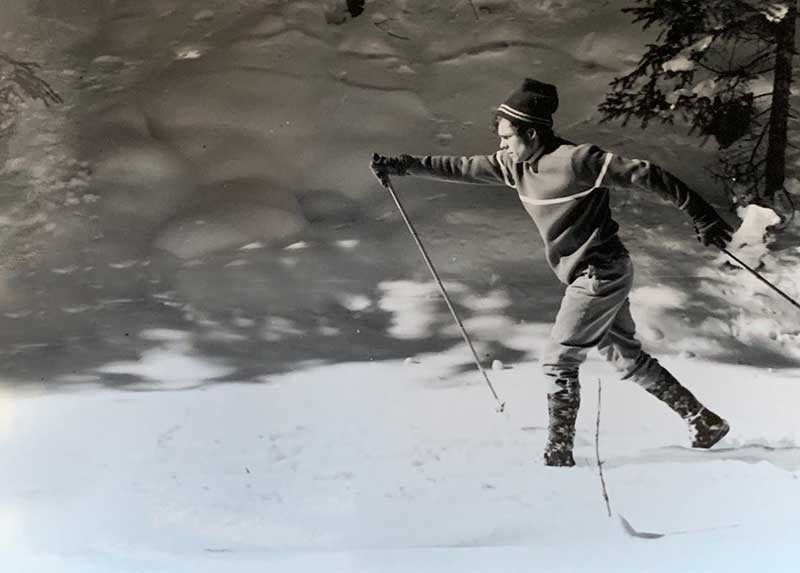 So, a few years later, in the summer of 1976, it became clear that there was a growing interest in adaptive outdoor programs for people with disabilities, and outdoor activities for people with disabilities began in Breckenridge. The staff was all volunteers, food was donated or provided by clients and the gear came mainly from volunteers’ closets. Later that year, articles of incorporation and bylaws were written and the organization received 501(c)(3) tax-exempt status with the IRS. Under the banner “Breckenridge Outdoor Education Center,” the first Board of Trustees, seven strong, was assembled and included Dr. Aris Sophocles (a doctor at the Breckenridge Medical Center), Kim Batcheller (the Town Attorney) and Olav Pedersen. Gene served as the first staff Director. 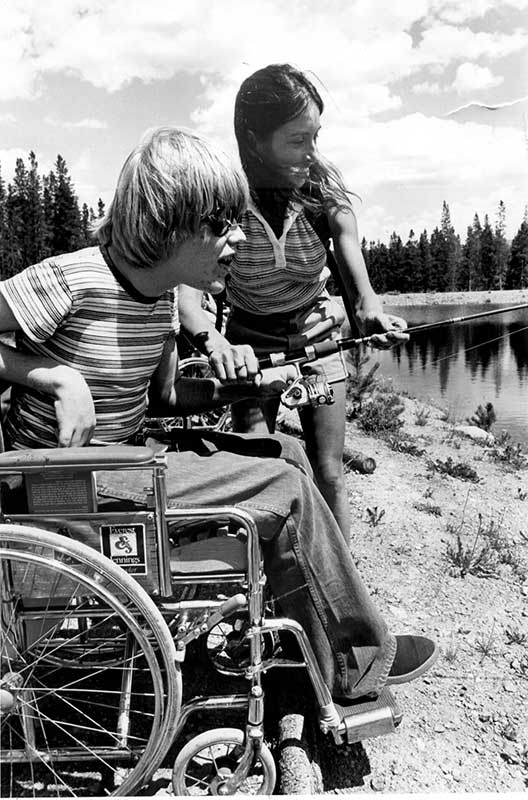 In the early days, the BOEC had no formal staff and relied heavily on volunteers. The BOEC had no real facilities, but through Gene’s association with the Ski Area, activities were held at the Nordic Center (then owned by the Ski Area) and at Layman Gulch Cabin between Peaks 9 and 10. The downhill Adaptive Ski Program had not yet been developed; so winter activities were limited to cross country skiing and sledding. Summer activities were a little more extensive and involved backpacking, camping, peak ascents, and canoeing (even a trip or two to the Boundary Waters in Minnesota, where Gene Dayton owned a lodge).

Also, in 1976, the Town of Breckenridge leased the F&D Placer, a 39-acres piece of land that was the site of the old town reservoir at the base of Peak 9, to BOEC. In addition, an old cabin at the Henderson Mill, dating from the 1930’s, was relocated and reassembled at the F&D site. For years, the Old Cabin represented the sole programming facility for BOEC; save for a few teepees scattered around the Program Site.

The early 1980’s represented a period of growth, experimentation, and eventually stabilization for BOEC. The credit for this evolution belongs to a great many staff and Board members who contributed considerable time and effort, ensuring the organization survived some serious financial setbacks. But with growth comes challenges, as there was no central administration office and the staff was forced to house at various places such as Colorado Mountain College, on Ridge Street, in Blue River, the Breckenridge Public Works land on Airport Road, and presently, at the former Breckenridge Sanitation District office on Wellington Road. 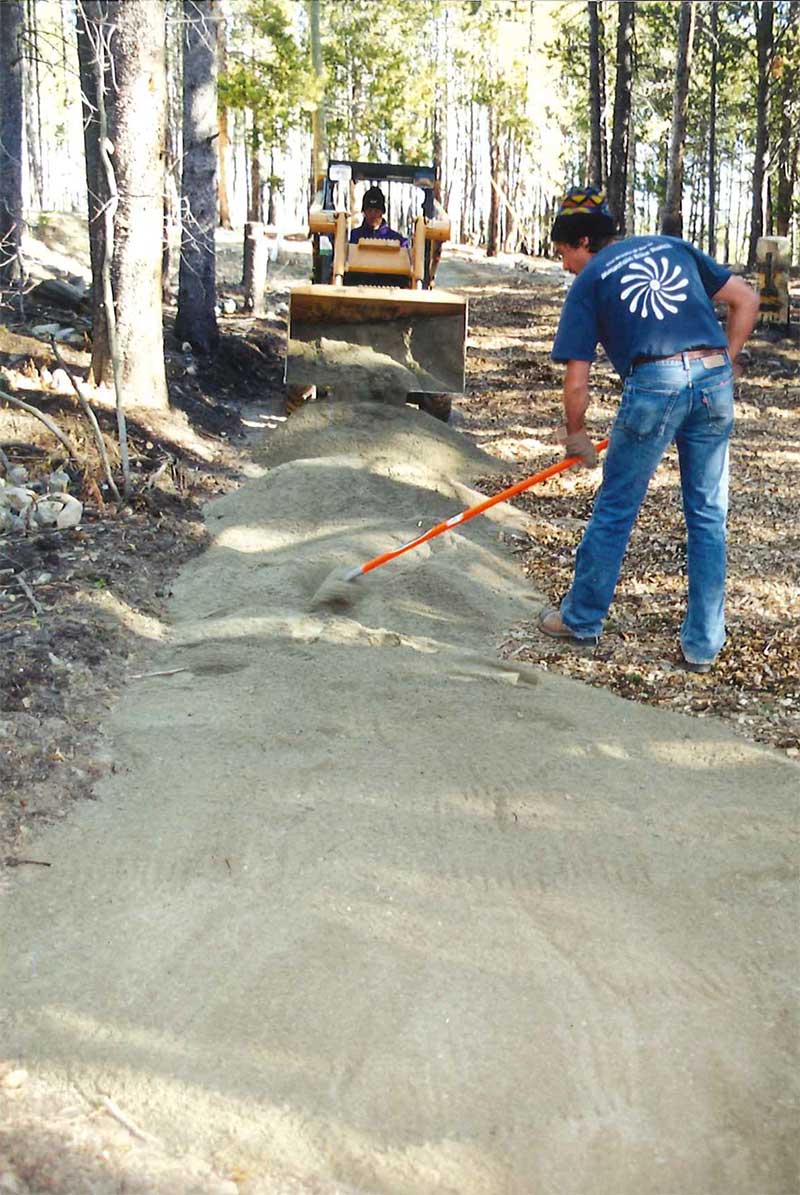 for the building the “New Cabin” (now called the Staff/Intern Cabin), and it was completed in 1982. A low ropes course was built in 1981, and a three element high ropes course was built nearby in 1982, along with the Staff Cabin. Also in the early 1980’s, a wheelchair accessible nature trail, complete with campsites, was painstakingly constructed from the Program Site to the base of Peak 10. Then in 1986, money was acquired to build a “wheelchair-accessible high ropes course,” a fairly radical concept at the time.

The Center saw an enormous increase in participant numbers in the Wilderness Program during this time. Staff was increased to as many as 12 Interns and 8 Instructors some seasons. Staff training became much more structured and consistent. The staff itself also became more consistent, with some staff members staying on for 4-5 years. This also marked a period of experimentation with program activities. In 1982, a rock-climbing program was started. Canoeing was offered to participants on Sawmill Gulch Reservoir. A Dog Sledding Program was developed from 1982-83, and a “Sled Skating” Program on Maggie Pond saw a brief emergence in 1984. 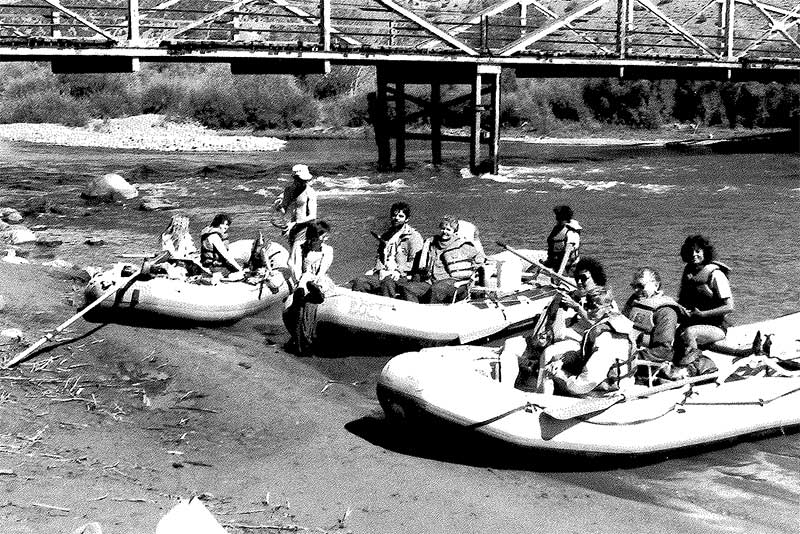 During the summer of 1982 BOEC began a formal rafting program. At the beginning of each summer season, professional guides were brought in to train BOEC Instructors to guide the rafts. At its height, the program utilized a fleet of four rafts and took participants on one day trips on the Colorado and Arkansas rivers, and on multi-day trips on the Yampa and Green rivers. Today BOEC operates a full rafting and canoeing program on the Upper Colorado, through Ruby and Horsethief canyons in western Colorado and through Labyrinth Canyon on the Green River in Utah.

Up until 1981, BOEC taught strictly cross-country skiing, but in 1981 that changed with the addition of a downhill ski program in a very embryonic and somewhat dubious form. Adaptive downhill skis had not yet been developed, nor were the ski areas very comfortable with the makeshift methods adaptive ski instructors had developed of transporting people with disabilities on chair lifts. Thus, BOEC’s first “sit-skiing” involved pulling people (mainly people with paraplegia) in Mountain Smith sleds up small sections of ski runs and letting them “ski/sled” down about 200 yards. Not very “empowering” by today’s standards, but the energy and enthusiasm around the project was a solid foundation upon 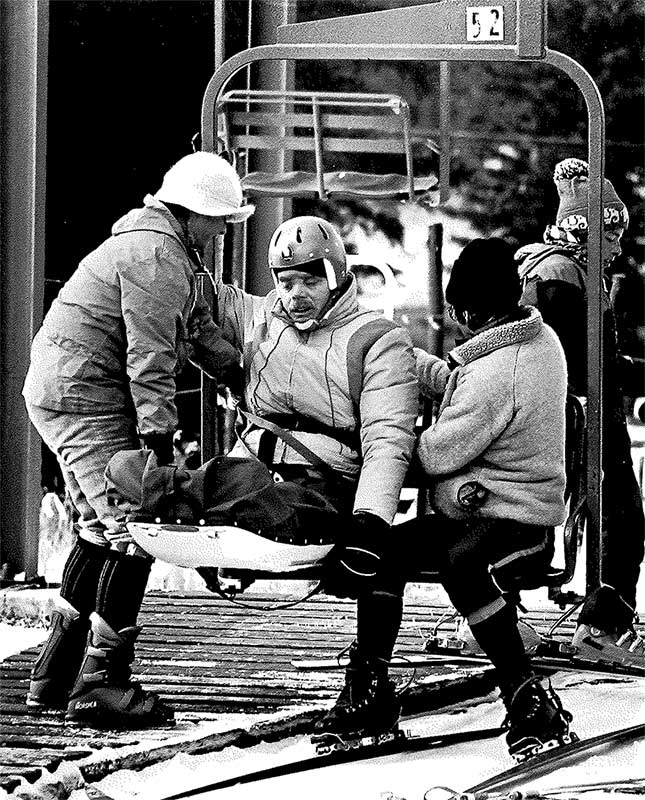 which to build. BOEC ran its “Sit Ski Program” (the Program was not named the “Adaptive Ski Program” until 1991) at Ski Cooper, transporting staff and participants to Cooper by van. Sometime during those two years, the Arroya™ sled was developed and became the first commercially produced and widely available adaptive ski. Using the Arroya™ sled, BOEC further experimented with and fine-tuned its “chair lift protocol”.

At the end of the second season, representatives from the Breckenridge Ski Area (BSA) were shown BOEC’s Program at Ski Cooper and asked if such a program could be run at the BSA. Breckenridge agreed to host the “Sit Ski Program,” and it was moved to Breckenridge the next year. Over the next few years, the BOEC rapidly emerged as one of the true innovators in adaptive skiing, helping to host “Regional Handicap Ski Competitions” in 1983, 1984 and 1987. In March 1985, BOEC helped host the “National Handicap Ski Championship”, at which the country’s first mono-ski prototype was tested. 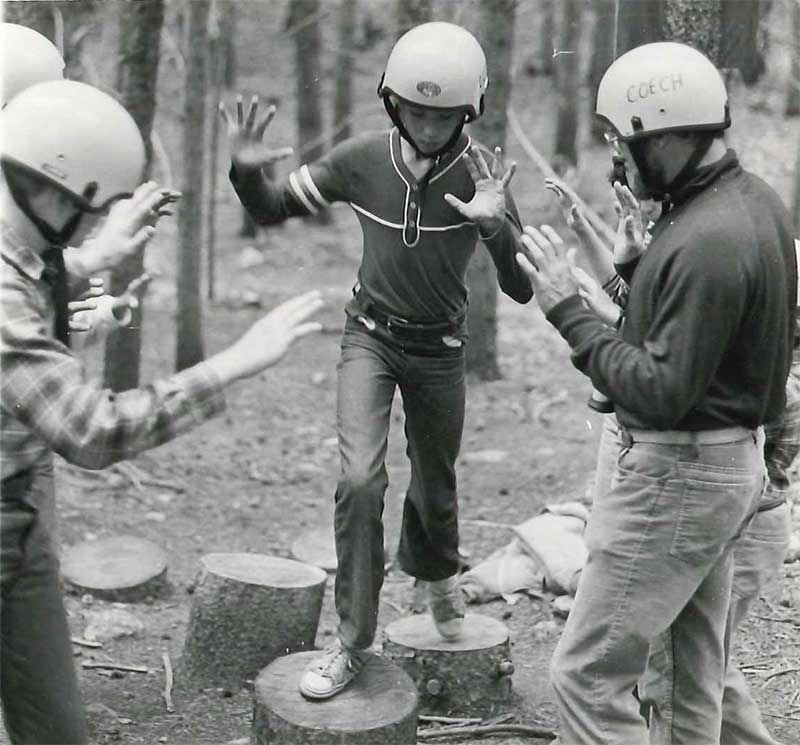 An ambitious expansion of programming and staff in the mid and late 1980s led to severe financial difficulties for BOEC. These financial difficulties in turn led to severe reductions in staff, which in turn led to severe reductions in programming. By 1990 the organization was operating without an Executive Director or Program Director, and was being run by the Board of Directors, who at times dug into their own pockets to pay the bills. Hence, the 1990 Board Retreat was a pivotal point in BOEC’s history. Faced with a gloomy future, the Board discussed a number of options and made the inspirational decision to save the organization, looking to its historical roots for support. With new direction and new leadership, BOEC began to expand the “earned revenue” concept adopted at the 1990 retreat into a philosophy of financial self-sufficiency for BOEC; much as BOEC had traditionally taught self-sufficiency to its clients. At its 1991 retreat the Board adopted the operating philosophy that earned revenue plus sustainable fund raising must cover operating expenses. Thus was born several new BOEC programs, including the Professional Challenge program, which provided experiential education for corporate clients. 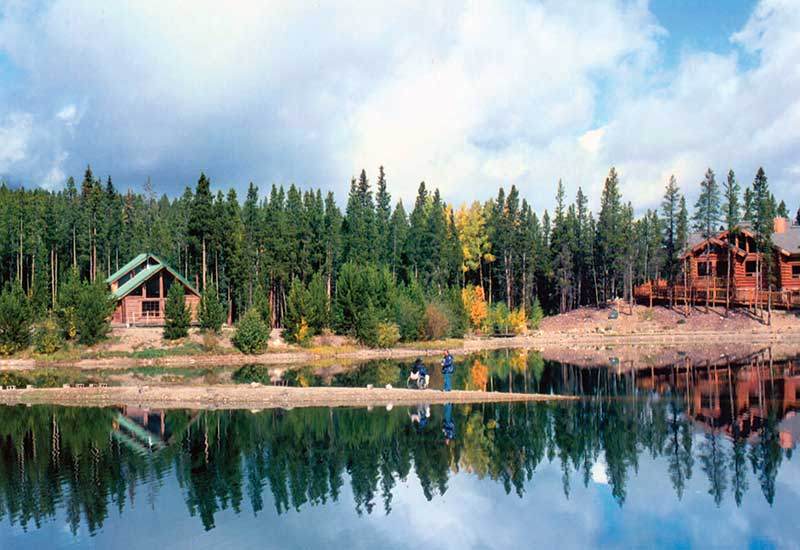 Another source of great optimism was a recent contact with new local residents Richard and Ann Griffith and their Griffith Foundation. The Griffiths agreed to make a donation that eventually totaled in excess of $400,000 for the construction of the “Scott Griffith Lodge”, a 6,000 square foot facility on the BOEC Program Site. The lodge was rededicated as the Scott Griffith Lodge in July 2005, in memory of their son who died of cancer at the age of 27. The Scott Griffith Lodge helped to “change the face” of BOEC, not only by providing a facility better suited for populations with more severe disabilities, but also by providing a much needed logistics center, staff office, garage, and a source of revenue in the off seasons. BOEC secured a 25-year lease (at $1/year, 1992-2016) for the F&D Placer lots from the Town of Breckenridge.

Success bred success as BOEC grew and improved in many areas through the early nineties in into the 2000s. The Adaptive Ski Program improved in countless ways: participant numbers grew 134%, the ski office was overhauled, a huge, loyal corps of volunteers (eventually numbering over 100) was developed and a fleet of new adaptive mono and bi-skis was built, larger than that of any Adaptive Ski Program in the country. 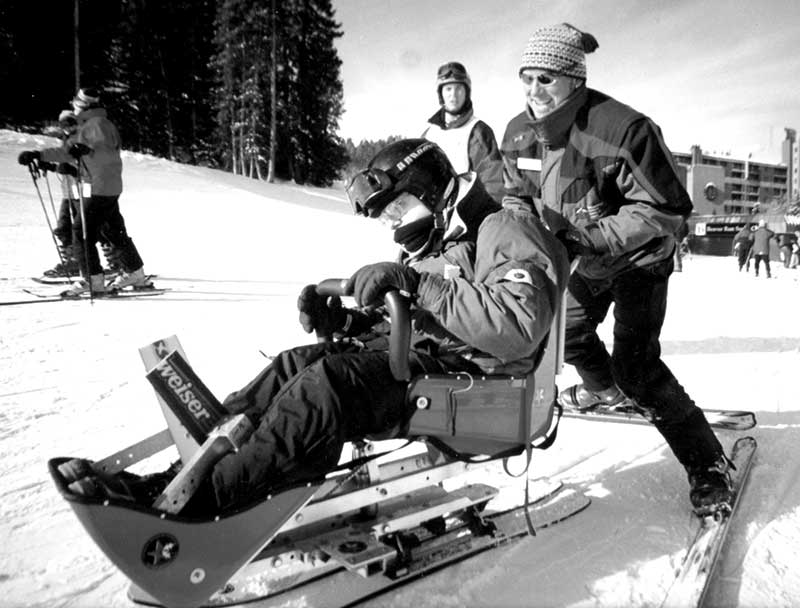 The Winter Wilderness Program was re-started, seeing a 120% increase in participant numbers. Efforts were made to encourage client agencies to raise funds on their own to come to BOEC, thus saving scholarship dollars and allowing BOEC to offer scholarships to more organizations. Soon the Wilderness Program emerged as not only a central component to the mission of BOEC, but also a substantial source of revenue. More and more diverse populations were served once again in the Wilderness Program, thanks to the Scott Griffith Lodge and a renewed marketing effort to serve more diverse youth groups. Course curriculums once more became “wildernessy,” as the staff placed greater focus on teaching skills and doing more backpacking trips and peak ascents rather than just cabin-based activities. 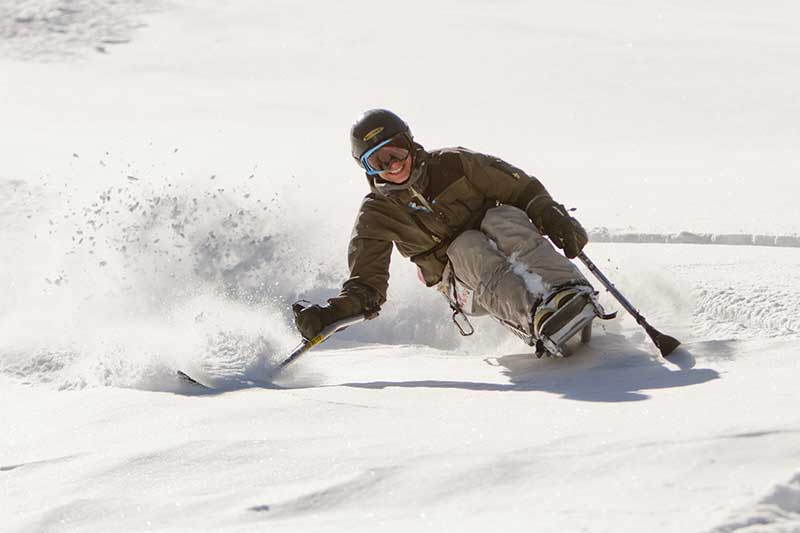 Through the nineties and into the 2000’s, marketing efforts were expanded and special events took on new energy as BOEC continued into an era of increased financial stability, high quality programming and national recognition. The Wilderness program grew significantly during this time, as well as increased program support from foundations and individual donors. In 2006, the Keystone Adaptive Center (KAC), run by BOEC, was opened in partnership with Keystone Resort. Adaptive skiing and handcycling are KAC’s core features. From 2007 to this day, BOEC has experienced the fullest and most successful years both in enrollment and finances, since its inception. These “banner years” have resulted in BOEC consistently serving nearly 3,000 participants per year with over 10,500 programming days.

BOEC’s year-round operations are funded through a combination of earned revenues, scholarships and general operating support. Today, after more than 45 years of existence, BOEC is strong and has been true to its mission–expanding capabilities through challenge and adventure, both for its participants and as an organization.

Challenge By Choice Adventure Retreat I